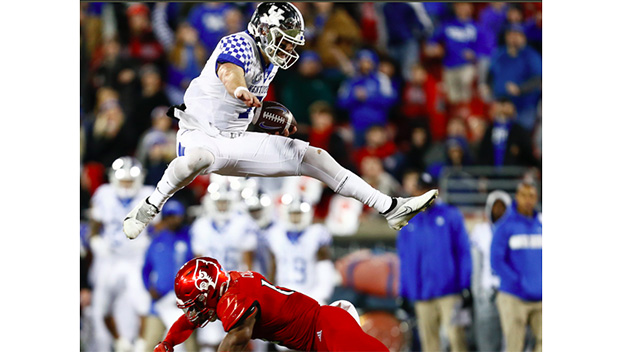 Kentucky quarterback Will Levis leaps over a Louisville defender in a 52-21 win over the Cardinals Saturday night. (UK Athletics Photo)

The Governor’s Cup is staying in Lexington.

Kentucky continued its recent dominance in the series against rival Louisville with a 52-21 victory Saturday night, giving the Wildcats their third consecutive win over the Cardinals, all in convincing fashion. Last year’s contest was canceled because of the ongoing pandemic, with both schools playing a conference-only schedule and navigating through unprecedented protocols during the season.

This year, Kentucky (9-3) picked up where it left off, overwhelming the Cardinals from start to finish, and will carry a three-game winning streak into the postseason. In the last three games between the two foes, the Wildcats have outscored Louisville, 153-44.

The 85-pound Governor’s Cup trophy that the Wildcats were huddled around in the locker room after the game, will go right back where coach Mark Stoops wants it.

“The trophy means a lot,” Stoops said. “We have a place for it for a reason. That’s where we want to go back and put it. It looks good in there.”

The win gave Kentucky its ninth regular-season victory for the second time in the past four seasons. Kentucky won nine games in 2018 and went on to defeat Penn State in the Citrus Bowl in Orlando to conclude a 10-3 campaign. The Wildcats will find out their bowl destination on Dec. 5.

In its last meeting two years ago, Kentucky quarterback Lynn Bowden rushed for 284 yards and scored four touchdowns. This time, it was Will Levis’ turn to take center stage in the instate showdown. Levis tied a school record for most touchdowns in a game with four rushing scores and outshined Louisville signal caller Malik Cunningham.

Levis threw for 149 yards but did most of his production on his feet, rushing for 113 yards and four touchdowns with most of those scores coming in the first half as the Wildcats built a commanding 24-7 lead at halftime and didn’t let up, adding four more scores in the second half.

“We called the same play four or five times,” said Levis. “If it ain’t broke, don’t fix it, I guess. There were some run plays. I saw an opening, and it benefits to have a quarterback that has legs and can run.”

“The difference in the game was their quarterback’s legs, which he hasn’t done much of that this season, but he did a great job running the q-draws and some scrambles for first downs and I think he ended up with four touchdowns tonight running the football which, obviously is not good,” he said. “I think it just wasn’t our night tonight. Give them all the credit for that.”

Behind the performance by Levis, Kentucky finished with 511 total yards. Chris Rodriguez rushed for 121 yards and a touchdown, while Wan’Dale Robinson caught nine passes for 97 yards. Kavoisey Smoke added a 13-yard score and La’Vell Wright one from 41 yards.

“I think you could tell our style and theirs is very different,” Stoops said. “For that offense to be effective you have to run the football. The physical presence has to be there, and it was there tonight.”

Known for his rushing and passing ability, Cunningham threw for 145 yards, but was just limited to just 35 yards rushing. The Cardinals finished with 352 total yards and only 144 yards on the ground.