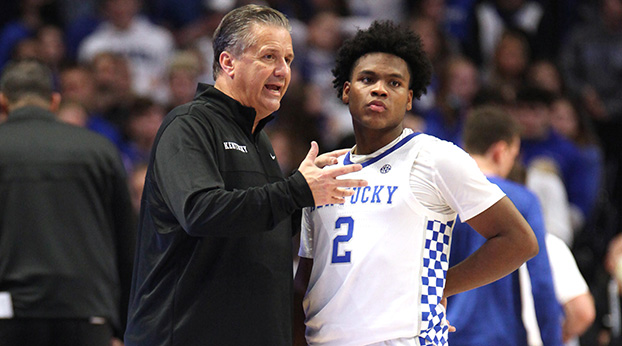 Count ESPN national director of recruiting Paul Biancardi as a believer in John Calipari’s 2022 recruiting class with the recent addition of Texas guard Cason Wallace, the third top 10 player in the 2022 class.

“Look for Kentucky to have a potent perimeter attack next season with Cason Wallace, Skyy Clark, Shaedon Sharpe, and Chris Livingston,” Biancardi said.

The ESPN analyst thinks Wallace was the perfect fit for Calipari and the other commitments.

“Wallace is a true combination guard and a two-way contributor because he can be effective with the ball, be a threat off the ball and defend with impact,” Biancardi said.

“With the addition of Wallace, Kentucky will have four prospects inside the top 20. That should slide the Wildcats up to the No.1 recruiting class.”

Wallace writes a blog for Sports Illustrated and believes the future Cats will be able to live up to their lofty rankings.

“I think we all have winning mentalities and I feel like we have a strong chance to win a national title. I know that’s already our goal now because we know what we signed up for coming to Kentucky,” Wallace wrote.

“I just look at all of the talent that we’ll have, and I love that we’ll be able to push each other in practice every day, because that’s the way you really get better.”

Travis Branham, a national basketball analyst for 247Sports, credits UK assistant coach Jai Lucas for building an early relationship with Wallace when he was still an assistant coach at Texas.

“Cason is just a winner. He doesn’t play a sexy game. He will not wow you by creating shots from himself like Shaedon and Skyy,” Branham said. “He is also an elite defender. He’s very good in transition. He can make shots. He just impacts the win column in a lot of ways.”

While Branham considers him a pass-first point guard and capable scorer, Wallace’s defense is what separates him from other players.

“He will be the best on-ball defender. He is just a big-time defender and very good positional rebounder,” Branham said. “ On the other end, he can function on and off the ball. That will allow Shaedon and Skyy to go get baskets.”