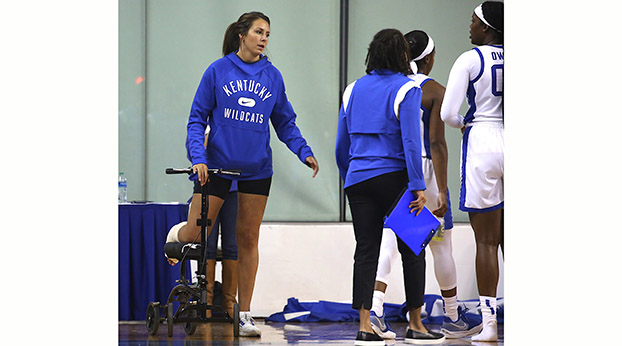 Former Harlan County standout Blair Green plans to help the UK coaching staff and players any way she can this season now that she's out with an Achilles injury. 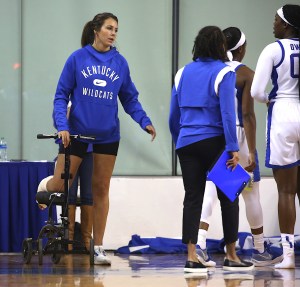 Former Harlan County standout Blair Green plans to help the UK coaching staff and players any way she can this season now that she’s out with an Achilles injury.

Putting in offseason work is nothing new for University of Kentucky senior Blair Green. However, her mother, Blair Green, sensed something was different this year.

“She was having a lot of fun, probably the most she has enjoyed a year,” said Debbie Green. “She always works hard but she put so much into this year. She had more confidence. I remember her senior year in high school. She was like coaching a different kid. She was at a different level maturity-wise. That’s how she was this year.”

All that changed for the former Harlan County standout when she ruptured her Achilles tendon and is now out for the season when she felt like she was ready for her best season at Kentucky.

Debbie Green, a former college player and her daughter’s high school coach, admits she was “heartbroken” when she found out about the UK senior’s injury.

“She is probably one of the most loyal and dedicated kids you will find. She always has such a good attitude,” Debbie Green said. “She plays through the good and bad. She loves Kentucky and all her teammates so much.”

Blair Green has not had a serious injury since having surgery after her eighth-grade season for a torn meniscus she played all season with and didn’t know about.

She did not even miss summer workouts with her team.

She hyperextended the same knee her freshman year and missed a few games and then missed two games her senior year with an ankle sprain. She had been injury free at UK until the knee injury in a closed scrimmage.

“It’s not fun for her right now,” Debbie Green said. “But you just can’t dwell on it. You have to think there is a reason why things happen and put it past you. I know it hurts really bad. The work put in at this level is amazing and nobody gets it unless you play at that level.

“It just deflates you to be hurt. You feel like you are going to start over at square on and you were at like square 5,000 before you got hurt. But she has to move on. Just take it one day, one week at a time.”

Debbie Green says her daughter “loves” strength and conditioning coach Lee Taylor who will oversee her rehab work. Her teammates have also been helping look after her, including driving her places since the injury was to her right foot and she cannot drive.

“She finished her degree in three years and will have another one (degree) when this year ends. I don’t know what she’ll do next year but she’ll find something because I know she wants to come back and play another year,” Debbie Green said. “She just has to find ways to stay involved, still contribute because she likes being busy and she loves this team. She has already said she’ll come back better than ever and with the way she will work, I believe her.”

Signed and sealed: Calipari ‘really excited’ about Class of…