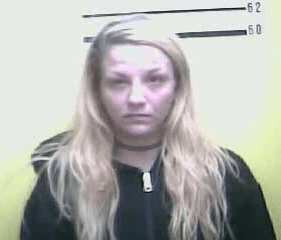 A Middlesboro woman is facing charges including trafficking methamphetamine and bail jumping after allegedly being found in possession of the drug and jumping bail.

According to the citation, Rose was arrested at approximately 10 p.m. on Tuesday. She was found in possession of a large bag which contained more than two grams of a substance suspected to be methamphetamine. Police also located a scale, multiple distribution bags and $46.

The citation additionally states Rose intentionally missed two court dates for felony cases after having been released from custody.

Rose was charged with first-degree trafficking a controlled substance (methamphetamine), and first-degree bail jumping. She was additionally served with a pair of bench warrants for failure to appear. Rose was lodged in the Bell County Detention Center.

• Donald Elliott, 47, of Pineville, was arrested by the Kentucky Department of Probation and Parole on Wednesday. Elliott was charged with a probation violation. He was lodged in the Bell County Detention Center;

• Tangia Ellison, 43, of Middlesboro, was arrested on Nov. 6 by Middlesboro City Police. She was charged with giving an officer false identifying information, second-degree criminal trespassing, and theft by unlawful taking under $500. She was additionally served with multiple bench warrants. Ellison was lodged in the Bell County Detention Center.