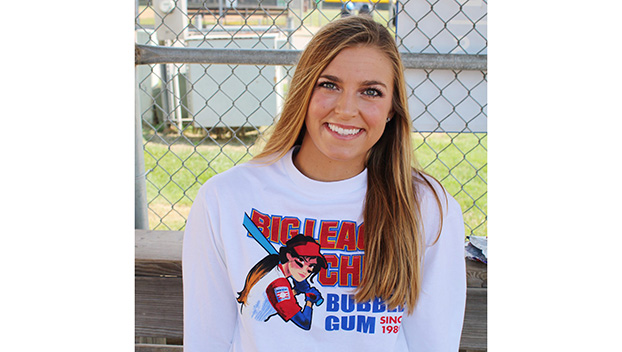 Kentucky senior softball player Tatum Spangler is one of nine players nationally to have an endorsement deal with Big League Chew.

She wasn’t sure if the Instagram message she got was legitimate or spam but Kentucky junior softball player Tatum Spangler was curious enough to see if the contact from Big League Chew Bubble Gum was real or not.

Now Spangler is one of nine athletes nationally — and one of three softball players along with Charla Echols of Florida and Brooke Nelson of Washington — to have an endorsement deal with Big League Chew.

“I have always liked bubble gum. The brand Big League Chew, you see it in concession stands at games and places like Dick’s Sporting Goods and other sporting goods stores. You just see it everywhere you go in the sporting world,” Spangler said.

“It was really kind of special to partner with them and have little kids look up to me just like I grew up seeing it around every Little League park I was in.”

Spangler says she normally does not chew gum in games but will in warmups. She said the “whole team was excited” for her deal because most of them like gum.

“I will definitely have some gum in the dugout now,” Spangler said.

She has “no idea” why Big League Chew picked her to endorse its product.

“I didn’t ask why they picked me. It was definitely an honor because there are a ton of amazing players out there and to be picked out of literally millions, it was a real honor and exciting to be kind of a role model for all the little girls out there,” she said. “They have more baseball than softball things and to get softball recognized with a baseball company is even better.

“It is really cool and really special for them to come to me. I don’t know what I did but it is pretty cool for me and hopefully our team, too. It’s a real blessing to be part of the Big League Chew team and hopefully this can only add to the growth of softball and bring even more recognition to our sport.”

“To incorporate softball on the shirt that way is special because there might be a little girl who sees that and says, ‘I can do this and wear one of these.’ I just really appreciate them putting softball on there for everyone to see.”