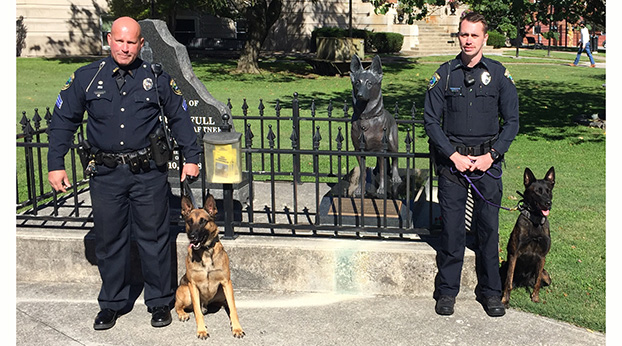 A plaque commemorating a K-9 Officer from Boyle County who perished while on duty was added to the K-9 Officer Memorial at the Bell County Courthouse in Pineville on Tuesday.

Also in attendance was artist Jaime Corum, who completed the original K-9 sculpture featured in the memorial.

“Neil Ward, our county attorney, knew that I did animal art and knew I was an animal lover,” Corum said. “He called me up after (Bell County Sheriff’s K-9 Deputy) Sean Pursifull and King were killed back in 2008.”

Ward asked Corum at that time if she would create a sculpture for the memorial.

“I told him I mostly paint,” Corum said. “But I had done some sculpture, so I was willing to try it and it would be an exciting challenge and an honor to contribute to the memorial.”

According to Corum, completing the structure was a lengthy process.

“I had to consult some sculpture friends,” Corum said.

Corum noted her associates taught her the necessary skills to complete the work.

“The process was a learning experience,” Corum said. “It was one of my favorite projects.”

Corum mentioned the memorial on the Bell County Courthouse grounds, originally unveiled in 2009, is a state monument.

“Neil (Ward) worked really hard to not only memorialize our officer…but to make this a state monument,” Corum said. “Any K-9 Officer killed in the line of duty is memorialized here with a plaque. Nikki is the most recent addition.”