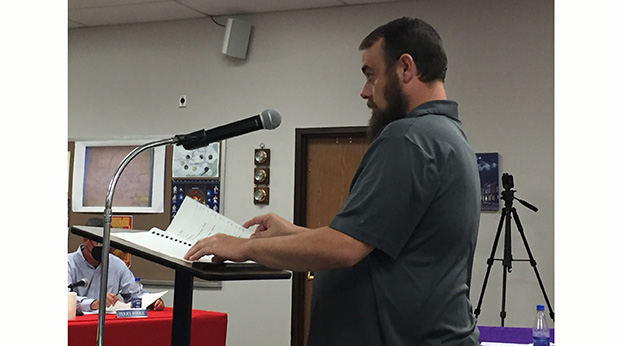 Managing Auditor Matt Shackleford presents the 2020 audit report to the Middlesboro City Council during a meeting on Tuesday. - Photo by Joe Asher

The Middlesboro City Council heard a report of the city’s 2020 audit during a meeting on Tuesday.

Mayor Rick Nelson called the meeting to order, then moved quickly to the audit, calling on Matt Shackleford to update the panel.

“I’ve been managing auditor over the city for the last few years,” Shackleford said. “What I’ll be presenting tonight is the audit for June 30, 2020.”

Shackleford mentioned the 2021 audit would be scheduled in the upcoming weeks.

“First is our overall auditor’s report,” Shackleford said. “Basically, we give opinions on…sections of the financial segments of the city.”

Shackleford then went over the audit in detail for the panel.

According to the audit, the city’s police and firemen’s pension fund had not been property monitored and did not have an actuary conduct an evaluation and study on the pension fund in a timely manner. The city’s response stated a study of cost and feasibility will be performed to correct the issues as soon as possible.

Following Shackleford’s report, Nelson explained how the situation with the pension fund came about.

“Back before the 90’s, each city and county had their own pension fund,” Nelson said. “Then they decided at some point to join the state pension fund. Middlesboro decided to keep what they had, so that’s where we are right now. I think we have five widows that are currently in that.”

Nelson noted the city had previously run behind on having audits performed. Shackleford said the city had been behind by three audits.

“So, can we say we’re officially caught up?” Nelson asked.

Shackleford confirmed the city is currently up to date on audits.

Council member Cory Eldridge inquired about a section of the report.

“I see that we have some internal control deficiencies,” Eldridge said. “Are they outlined specifically or is it just a generalized statement? Do we need to follow up with you?”

Shackleford clarified the issue had been resolved.

“That’s something I’ll need to correct,” Shackleford said. “All the internal control situations have been resolved.”

The council then passed a motion approving the audit report.