Tunnel exhibit to run through Oct. 30 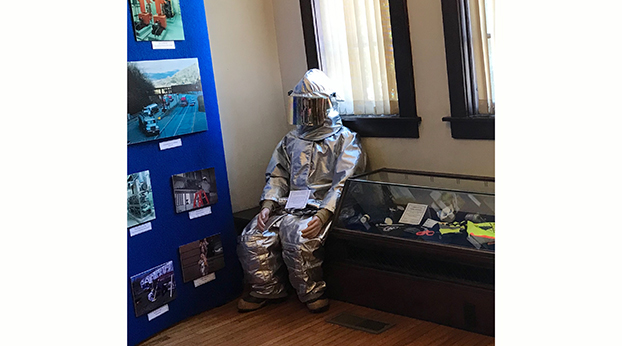 A display at the Bell County Historical Society Museum is dedicated to the Cumberland Gap Tunnel features items such as this HAZMAT suit, representing the suits worn by tunnel personnel in case of emergence/Photo submitted

The Cumberland Gap tunnel, which allows quick access on US 25E from Middlesboro to Tennessee, celebrated 25 years in operation on Monday.

To mark the 25th anniversary of the tunnel’s opening, The Bell County Historical Society Museum is featuring an exhibit dedicated to the tunnel until the end of the month.

Jes’Anne Givens, director of the Bell County Historical Society Museum, talked about the display in an interview on Monday.

“The tunnel (Cumberland Gap Tunnel Authority) put the exhibit together and offered it to us for the 25th anniversary and we’re very excited to be able to have it,” Givens said. “We have our own, but they also brought in a huge display board, and there are pictures from 25 years ago and today.”

Givens said there are also items related to the tunnel available to view at the museum.

“Different artifacts are displayed in one of our cases,” Givens said. “There’s a HAZMAT suit like they wear if there’s any problem in the tunnel…all kinds of different things.”

The first 100 people to view the exhibit received a commemorative coin marking the 25th anniversary of the tunnel, Givens said.

“They also did a 12-minute documentary on the tunnel, LMU helped do it,” Givens said. “You can come in and we’re showing it in our library. Or, if you’ve got a smart phone there’s a code you can scan and it will pop up on your phone.”

“It goes through the history of the tunnel, how it works and what they have to go through on a daily basis,” Givens said. “It’s a really informative video.”

According to www.cgtunnel.com, the tunnel opened on Oct. 18, 1996, and utilizes different types of technology to monitor the facility for any problems that may arise. A SCADA (Supervisory Control and Data Acquisition System) keeps track of the operation of carbon monoxide monitors, smoke and heat detectors and ventilation fans located in the ceiling of the tunnel. The tunnel is staffed 24 hours a day, seven days a week.

The exhibit is free to the public and can be viewed at the Bell County Historical Society Museum from 10 a.m. until 4 p.m. Tuesday through Saturday until Oct. 30.