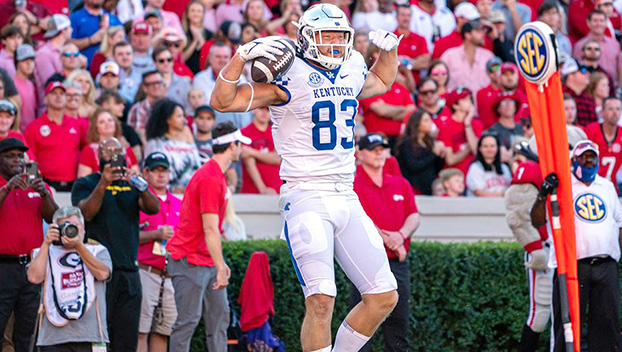 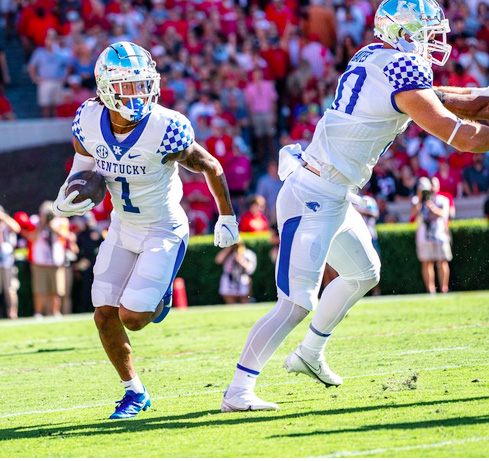 Wan’Dale Robinson looks for running room after catching a pass against the Georgia defense. He caught 12 passes for 39 yards, including a one-yard touchdown catch on UK’s final offensive play. – UK Athletics Photo

Not many teams have scored against Georgia’s daunting defense.

Kentucky crossed the goal line twice against the top-ranked Bulldogs in the battle of unbeaten teams on Saturday in Athens, but Georgia didn’t flinch in a 30-13 victory. The No. 11 Wildcats (6-1, 4-1 Southeastern Conference suffered their first setback of the year, while Georgia (7-0, 5-0) took sole possession of first place in the SEC East with five games remaining in the regular season.

“This is what the No. 1 team in the country looks like, and that’s what we’re aspiring to look like,” Kentucky coach Mark Stoops said. “They do things the way you’re supposed to. They have a lot to do with it, but a lot was self‐inflicted and it started early. We just didn’t get lined up right. We had a good opening drive. A lot of things that we can correct and get better.”

Kentucky’s running attack, which rushed the ball at ease in a dominating 42-21 win over LSU last week, managed a season-low 51 yards against the Bulldogs, which hadn’t given up two or more offensive scores in a game this season. The hosts blocked a 33-yard field goal and extra point attempt by the Wildcats in the second half.

Chris Rodriguez had just seven yards on seven carries for the Wildcats, which relied heavily on the passing game to chalk up 243 total yards in the contest. Kentucky quarterback Will Levis threw for 192 yards and a pair of touchdowns while targeting eight receivers. Robinson hauled in 12 catches for 39 yards and a touchdown, while DeMarcus Harris, Isaiah Epps, Justin Rigg and Izayah Cummings combined for 106 receiving yards, with Rigg hauling in a 1-yard touchdown catch in the second quarter.

“They are a great defense,” Levis said. “They are coached really, really well. Obviously, they have the players.

They are long, athletic, strong, and they scheme up well. I think we were able to do some things that we are going to be proud of when we look at the tape, but we definitely had opportunities to do a little more. At the end of the day, that is the No.1 team in the nation for a reason. All credit to them for how well they played.”

The Bulldogs collected 416 yards against the Wildcats’ defense, which had played well in spurts this season.

Georgia managed 166 yards rushing but did most of its damage through the air. Georgia signal-caller Stetson Bennett threw for 250 yards and three touchdowns. Receiver Brock Bower hauled in five catches for 101 yards and two scores.

Kentucky senior Josh Paschal wasn’t surprised by the Bulldogs’ ability to make big plays, especially in the second half, as Georgia created a degree of separation between the two teams after leading 14-7 at the half.

“They (Georgia) are a great team. I give all the credit to them,” Paschal said. “They came out and played hard. When you play against the number one team, you can’t make mistakes. That is what we have to learn from. How to respond to those mistakes that we make and to limit those as well.”

Georgia coach Kirby Smart said the Bulldogs, who increased their winning streak to 12 straight games over the Wildcats, had to earn every yard in the SEC East showdown.

“That was a really physical football team we played,” he said. “Every single time we play them it’s just tough.

They play tough, hard‐nose football. They do a tremendous job in all three phases. They don’t make many mistakes, and when you have a team like that, you have to beat them methodically.

“It’s tough, they have a really good football team. Proud of our guys. I thought our DNA showed through.

Our DNA continues to repeatedly show up — composure, connection, resiliency, and toughness — those qualities come through in this team.”

Stoops still believes his team will bounce back from the first loss of the year.

“I still love this football team, love the way they work,” he said. “We just have to have better-disciplined execution when you are playing quality teams like this. We are going to get back to work.”

Keith Taylor is the sports editor for Kentucky Today. Reach him at Keith.taylor@kentuckytoday.com or via Twitter at keithtaylor21.