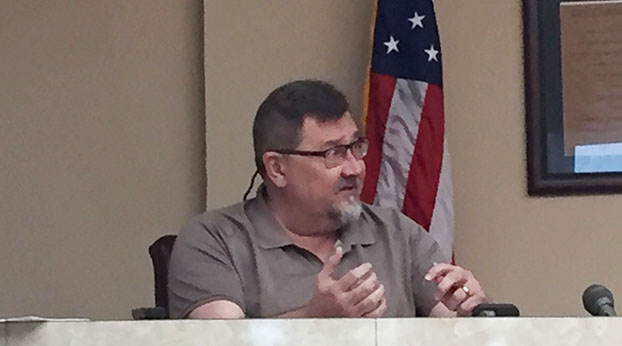 Bell County Judge-Executive Albey Brock goes over a resolution with the fiscal court during a meeting on Tuesday. - Photo by Joe Asher

The Bell County Fiscal Court passed a resolution related to federal COVID-19 relief funding during a meeting on Tuesday.

Bell County Judge-Executive Albey Brock brought the resolution up to the court, advising the county had yet to receive awaited updated guidance on how the relief funds can be used.

“As everybody is aware, we’ve received a considerable sum of money through…federal relief funds as a result of COVID,” Brock said. “We still haven’t gotten revised guidance, KACo’s (Kentucky Association of Counties) telling us that we probably will see that this month, but they also told us that we would see it around the first of September.”

Brock pointed out these funds are unique and the usual spending procedures are not viable.

“Normally, we use the Department of Local Governments as our failsafe on expenditures,” Brock said.

Brock explained the DLG reviews items such as the county’s budget and advises whether it is in order or not.

“With these federal funds, we’re dealing directly with the Department of the Treasury,” Brock said. “All the calls that I’ve been on…they’re really cautious. They’re telling us to be careful. They’re saying wait until the revised guidance before you do anything.”

Brock pointed out misuse of the funds, even if well intentioned, could lead to problems.

“When I say misuse, I don’t mean that in a nefarious way, I mean that in an unapproved way,” Brock said. “For example, we can’t take this money and buy a road grater, we know that…If it’s found out later that you did…when they do that audit, they’re going to say you’ve got to pay it back.”

Brock noted KACo has endorsed Stites & Harbison and Compass Municipal Advisors to provide consultation on how to use the funds. The fee for the service is set at 1.5 percent of the amount of the expenditure.

Brock explained the assistance will also include assistance with auditing and reporting related to the funding. There is no cost should the county not require the service.

“They only get 1.5 percent if we ask them,” Brock said. “By approving this (resolution) we’re not giving them a dime.”

After some further discussion, Brock read the resolution.

“I’ll ask for a motion to approve a resolution adopting a policy for engaging financial and legal advice for the expenditure of American Rescue Plan Act State and Local Fiscal Recovery Funds, a policy for approving compliant expenditures, and repealing inconsistent resolutions, and  to engage Compass Municipal Advisors, LLC and Stites &Harbison, PLLC, to provide professional financial and legal advice in the administration, planning, execution, expenditure, recordation, and reporting associated with federal assistance received from the federal SLFRF,” Brock said.

The court approved the resolution with no objections.

Brock mentioned he hopes the funding can be used to provide raises for county employees.

In other court activity:

• The court passed a motion to pay bills and make necessary transfers;

• The Bell County Treasurer’s report for the previous month was accepted;

• The Bell County Sheriff’s claim sheet for fee account for the previous month was accepted;

• The Jesse Nese Road Extension was accepted into the Bell County Road System in District 1;

• The court accepted checks from Bell County Sheriff Mitch Williams in the amount of $23,801.42;

• The court accepted checks in the amount of $30,679.71 from Bell County Clerk Debbie Gambrell;

• Payment to Abner Heating and Air in the amount of $3,400 for a new heating and air unit at the Bell County Animal Shelter was approved.

Fox retiring at Clear Creek: ‘I owe my family…