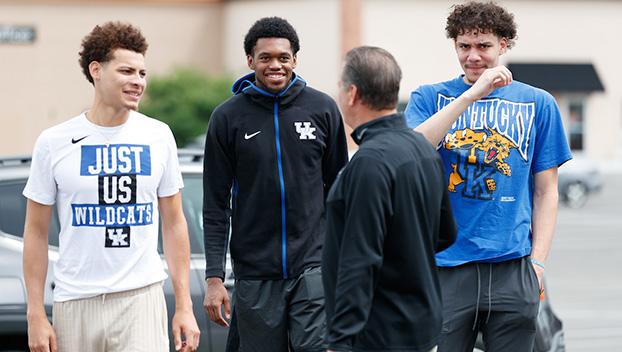 UK Radio Network analyst Mike Pratt, a former Kentucky All-American, says the lack of preseason buzz for basketball this year is understandable and no cause for concern.

“There has been a hangover from last season. Fans have not lost faith but they still cannot comprehend last season. I do think a lot of fans are excited about what Cal did in the offseason, but don’t want to be fooled like they were last year,” Pratt said.

“Football buzz was always in August and September. If football stumbles early, talk turns to basketball. This football team had a little more juice. It was an attractive team to start the season with a new coordinator, new quarterback, new juice.”

So will there soon be more “juice” for this basketball season?

“A dead man would have more juice than we had last year,” Pratt joked. “Nobody was more disappointed with last season than (John) Calipari. He was torn up about the year. I think he took the necessary steps to get the train back on the track. I don’t know how far the train will do but I can assure you it will not be a year like last year.”

Pratt said the “pieces didn’t fit last year” for Calipari’s team and that it does not matter whose fault that was.

“Pieces that did not fit left,” Calipari said. “(Davion) Mintz stayed and he delivered last year. When you have a turnover in players, you either fix the problem or you don’t get it fixed no matter who the players are.

“You cannot judge this group against last year’s group except when they start playing. It sure looks to me like the pieces fit a lot better. I am not saying they will win a national championship. Who knows about that? There are a lot of good teams out there. I think it will be a dogfight to see who wins the championship but Kentucky has players to have a chance to do that this year.”