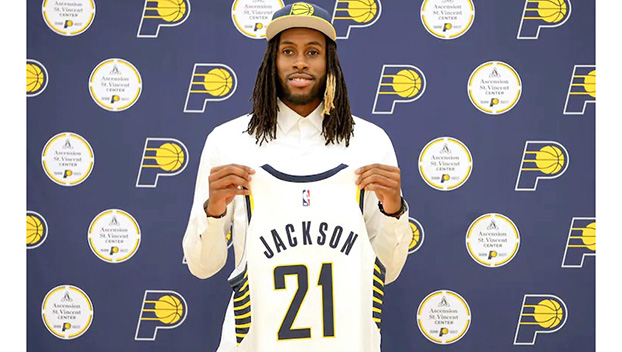 Rookie Isaiah Jackson has already made a big impression on the Indiana Pacers. (NBA Photo)

“I’m not trying to compare him to Paul George right now but as a pure athlete he does some things that I’ve not seen in the gym in a long time,” Pritchard told IndyStar writer Akeem Glaspie. “He is a fast-twitch athlete. He’s at the rim all the time and I don’t know if it was fair the way we looked at him.

“I think he’s got super talent, he’s a good worker, and I think sky’s the limit for him. We got a diamond in the rough there.”

Jackson was the 22nd pick in the 2021 NBA draft by the Los Angeles Lakers and then traded to Indiana.

Jackson averaged 8.4 points, 6.6 rebounds and 2.6 blocked shots per game in his one season at UK and was named to the all-SEC defensive team.

Jackson showed at UK he could defend multiple positions, one thing the Pacers also like. Kentucky coach

John Calipari warned NBA teams that Jackson could be a draft steal.

“His defensive versatility is absolutely breathtaking,” Indiana coach Rick Carlisle said. “I just have not seen a guy, move, block shots, change shots, be able to guard in any position the way I’ve seen him be able to do it.”

Jackson has always been that way. He prioritized defense over his offensive game in college and most of his one year at UK. That’s why Calipari said he will blossom in the NBA when his offense catches up with his defense.