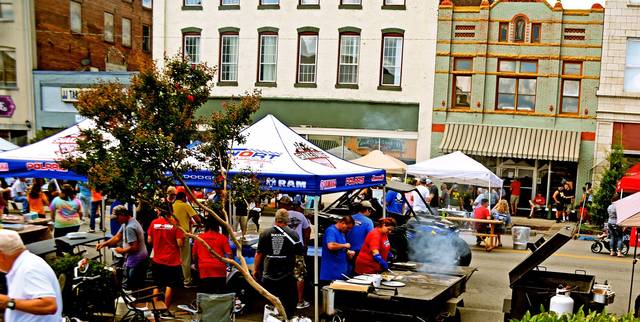 Middlesboro’s Wing Fling is set for Saturday, Sept. 25, with all the trappings that have made the chicken wing-centered event one of the city’s favorites.

“The Wing Fling is an amazing place to come and eat delicious wings,” Beaver said. “Anybody can come out and buy a $12 ticket and taste all the amazing wings the teams are cooking.”

While a big part of the event is eating chicken wings prepared in a variety of ways, it is also a way to show off your chicken wing cooking and preparation skills.

“If you think you are the best wing cook, this is the time to show us that you really are the king of the wings,” Beaver said. “You can have a team, it’s $200 to enter a team at the Wing Fling.”

The $200 entry fee includes a spot in the competitor’s area as well as all the wings to be cooked.

The Wing Fling has become a popular event in its relatively short history.

“I think it’s been going on about six years,” Beaver said. “The coolest thing about this is how it started. It was just a group of guys who liked wings and wanted to have a good time, they decided to have a festival in Middlesboro all about cooking wings, and that’s how it got started.”

Beaver said this year the event will be held in the City Hall parking lot in order to allow for better access to electricity and space.

“All the teams will be right there along the Canal,” Beaver explained. “You will come in over the bridge from 21st Street, and you can buy your ticket. The $12 ticket gives you a taste at every single booth. As of last count, we have 14 teams.”

The public will be able to cast a vote for their favorite wings for the People’s Choice award. There are also other awards to be given after nationally accredited judges taste the wings and make their decision about which wings are the best.

“What’s going to happen is once the judges get everybody’s wings, and nobody will know who’s wings are whose, it will go to the judges and they will select the winners,” Beaver said. “There’s a first, second and third place, then whoever wins first place can move up the road. If they want to go to a state or regional competition, they can just move right on up to as far as they can keep winning. I would love to see somebody from Middlesboro be the best wings in the United States. Who wouldn’t love that?”

Along with the wings, there will be other vendors selling different sorts of items.

Beaver mentioned the prizes are larger this year, with the first-place winner taking home $1,250, the second-place winner will receive $750, and third place will win $500. The People’s Choice winner will get a trophy and free entry into next year’s Wing Fling.

For more information on entering a team in the event, go to https://www.downtownmiddlesboro.com and go to the “Events” tab.

There are also opportunities for sponsorships. Inquire about sponsorships via email at downtownmiddlesboro@gmail.com. There is also sponsorship available on the Middlesboro Main Street Facebook page at https://www.facebook.com/MboroMainStreet.