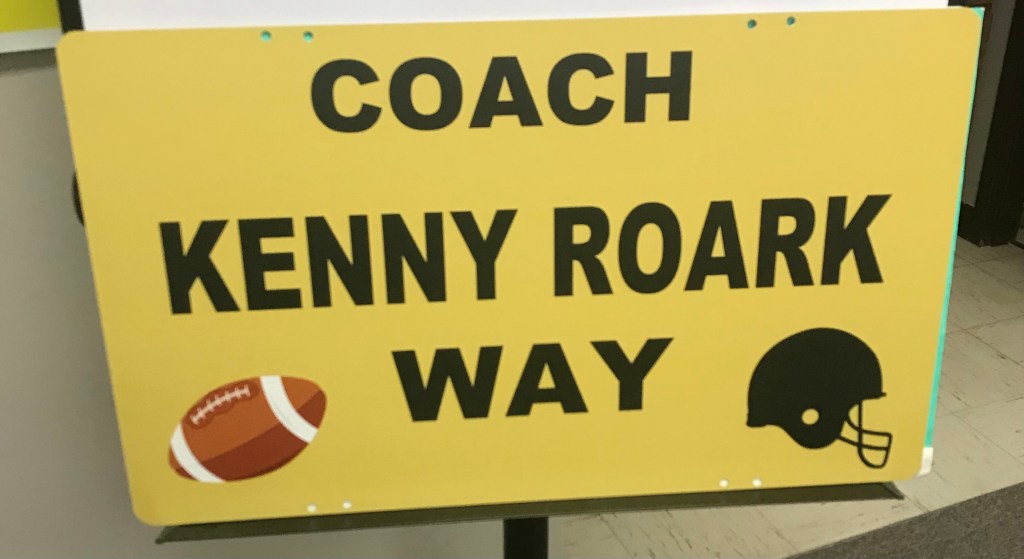 David Mike, who knew Roark personally and professionally, gave some background on the events that led to the city’s decision to name the roadway in Roark’s honor.

“We (Mike and Middlesboro City Mayor Rick Nelson) had talked about doing this last year,” Mike said. “Of course, everything got put on the back burner because of COVID, so I am pleased we are going to be able to honor Kenny and his memory this Friday at the unveiling of Coach Kenny Roark Way.”

Mike said his friendship with Roark began when the two were young.

“We grew up together in a section of Middlesboro called The Junction,” Mike said. “Kenny was a teammate of mine. We played together at MHS (Middlesboro High School) and then later we were fortunate enough to coach together when he was the head coach at MHS. Then later on I was the athletic director when Kenny brought home the state championship.”

According to a press release, Roark’s accomplishments included being named All SEKC in 1974 and 1975, first team all-state in 1974 and 1975, and setting a state record of 21 solo tackles in the 1974 state championship game. Roark attended the University of Kentucky on a scholarship, playing center in an outstanding career. He was named All-SEC center in 1980 and voted best offensive lineman in 1979 and 1980. Roark was a member of the 1976 Peach Bowl team and served as co-captain and MVP for the UK Wildcats in 1980. He was with the Cleveland Browns in 1981 and the Washington Redskins in 1982.

Roark began coaching after his playing career ended, returning to Middlesboro to become head football coach at Middlesboro High School. He coached at MHS for 17 seasons, with a record of 54 wins and 72 losses. He took the Yellow Jackets to 16 consecutive winning seasons, including a semi-finals appearance in 1997 and a state championship win in 1998. He was inducted into the Middlesboro Sports Hall of Fame in 1991.

Mike mentioned Roark’s best qualities as a coach included making adjustments to his team’s strategy during a game.

“I was always amazed at how well he could make adjustments at halftime in response to the opposing team,” Mike said.

Along with football, Roark also played other sports at the high school level.

“He was an outstanding athlete,” Mike said. “A lot of people didn’t realize that he was a multisport start for MHS. He played baseball, basketball and football.”

Mike pointed out Roark genuinely cared about his players and students.

“He had a wonderful relationship with his players,” Mike said. “The students at the high school loved him…a lot of people never got to see behind the scenes. He just had a kind heart. That’s what made Kenny special.”

“We all miss Kenny,” Mike said. “We spent many Sunday afternoons at his house watching game films, all the coaches and those that were close to Kenny. Those are good memories; I really appreciate the city honoring Kenny and naming 16th Street in his honor.”

The public is invited to attend the ceremony.

“We want to invite all Kenny’s former players and any Yellow Jacket fans to come out for this special time,” Mike said. “It’s a great time to do this. It’s 100 years or Middlesboro High School football this year, and there’s no better time to honor a great Yellow Jacket.”

The ceremony will take place at 5:30 p.m. on Friday at the corner of 16th Street and Lothbury Avenue.

“We are going to unveil the sign at 5:30 p.m., so we encourage people to come out about 5:15 to find a parking spot,” Mike said. “People can park off of 16th Street at Hearthside Bank, formerly Home Federal, they’ve been gracious enough to say those attending the unveiling ceremony can park in their parking lots there.”