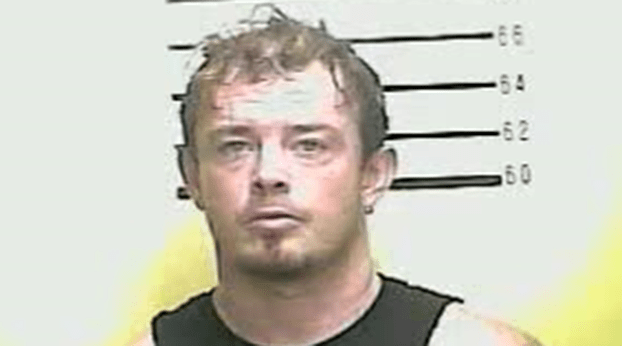 A Middlesboro man is facing charges including robbery, torture of a dog, and fleeing from police after his arrest on Friday.

According to the citations, Barnes was involved in a motor vehicle pursuit on Aug. 25 which concluded at the dead-end of Russell Lane. Wilson jumped out of the passenger side door of the vehicle and ran into the woods at that time.

A citation also states Wilson robbed a male at a Chester Avenue location, threatening the use of physical force in order to commit the theft. The victim’s dog was killed during the incident.

Wilson was charged with first-degree robbery, torture of a dog or cat with physical injury or death, and second-degree fleeing or evading police (on foot). He was also served with multiple bench warrants. Wilson was lodged in the Bell County Detention Center.

In other police activity:
• Travis Brock, 41, of Middlesboro, was arrested on Friday by Middlesboro City Police Officer Ryan Collins. He was charged with first-degree possession of a controlled substance (methamphetamine), possession of drug paraphernalia, giving an officer false identifying information, possession of marijuana, operating on a revoked or suspended operator’s license, failure of owner to maintain required insurance, improper display of registration plates and failure to wear seat belts. He was additionally served with multiple bench warrants. Brock was lodged in the Bell County Detention Center;

• Anthony Robertson, 51, of Middlesboro, was arrested on Thursday by Middlesboro City Police. He was charged with first-degree possession of a controlled substance (methamphetamine). Robertson was lodged in the Bell County Detention Center.

• Pricilla Jones, 40, was arrested by Bell County Sheriff’s Deputy Mart on Friday. She was charged with first-degree trafficking a controlled substance (methamphetamine). Jones was lodged in the Bell County Detention Center.