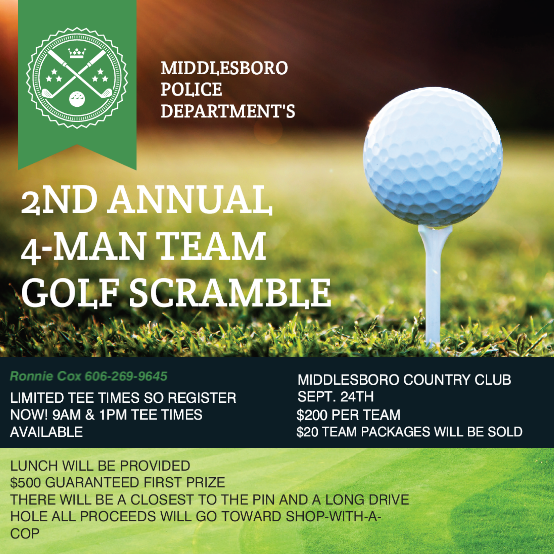 According to Ronnie Cox, of the Middlesboro Country Club, the scramble is a “best ball” competition.

“Everybody tees off, and the play the best ball up to the last putt,” Cox said.

Middlesboro City Police K-9 Sgt. Harvey Johnson explained how the Cops for Kids program uses the funds from events such as the golf scramble.

“This is a program that Officer Petey Gilbert started back in the 80s,” Johnson said. “He saw there was a need to help our needy kids that we have here in Middlesboro. We answer so many calls and go to so many places where the kids barely have anything. So, he started this program, and handed it to me a couple of years ago when he retired.”

Johnson said the department holds different types of fundraising events a few times a year, such as fishing tournaments and the golf scramble.

Johnson shed some light on how Cops for Kids operates.

“We work with the Middlesboro School System,” he said. “What we do is, families that need financial help for Christmas give us a list with the child’s name, age, clothing sizes, and some kind of toy they would like.”

Johnson said the money from fund raisers such as the golf scramble are then used to purchase the items for the children.

“We’ve bought socks, shoes, underwear, jackets, to make sure the child has plenty of clothing,” Johnson said. “We also buy them one toy that they’ve put on the list.”

He said an event is then held for the children at the Middlesboro Civic Center, with food provided by most of the area restaurants and other items provided by many local retailers.

“We have a big dinner for them,” Johnson said. “While the dinner is going on, the Middlesboro Choir will sing Christmas carols, and then Santa Claus comes and visits the kids. Santa gives them the gifts and we help them unwrap them. It’s great.”

Johnson pointed out the program is lucky to have the support of area retailers, restaurants, and the public.

“I couldn’t do it without them,” Johnson said. “It wouldn’t be possible.”

All proceeds from the golf scramble will go to the Middlesboro City Police Department’s Cops for Kids program.

Anybody who would like to make a donation to the Cops for Kids program should call the Middlesboro City Police Department at 606-248-3636.