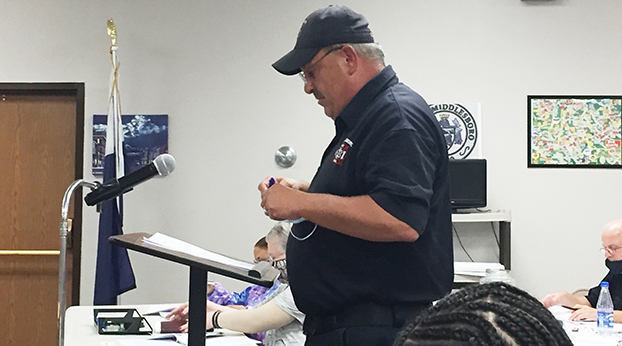 “Mention to the council about the enhanced Medicare/Medicaid billing,” Nelson said.

England explained some recent developments in the way the city’s ambulance service bills Medicare/Medicaid for services.

“The enhanced Medicare/Medicaid payments come from the federal government via the state,” England said.

“They looked back over a period of several years, and realized that in rural areas such as ours, the biggest portion of our customers are on Medicaid or Medicare.”

According to England, the reimbursement rate is based on many having no private insurance.

“At the reimbursement rate that we were receiving from them with no private insurance paying the higher rates, it was really hard to operate and keep vehicles maintained, supplies coming in and keep payrolls paid,” England said. “It was probably a two-and-a-half-year process, a lot of data gathering, and we got approved – I don’t know how long it will last – but its about $260,000 a year in a supplemental payment from the government. Out of that, we do still have to pay our billing services their fee.”

England said once all the taxes and expenses are paid, the department will receive a significant payment. “When it’s all said and done, about $18,000 to $19,000 a month will be added into the revenue stream,” England said.

“That’s pretty big for our department.”

England also advised the council of some upcoming information.

“We’re looking forward to next month and hearing how the grants are coming on another truck and our training facility,” England said. “I’ve got my fingers crossed, I’m a little bit skeptical on them, but I was a little skeptical on the last ones we got…They’ll probably be valued at just a little under a half million dollars if we get those, at very little cost to the city.”

England added that his department has been remodeling the inside of the fire department building.

“Some of my guys came to me and said if we could get the (materials) they’d be willing to work while they’re on duty,” England said. “We’re putting all new flooring down, base trim, painting, we’re getting the inside looking pretty good.”

England told the panel once the inside was finished, they would start working on the outside of the building.

England also explained with the uptick in COVID-19 cases, ambulance runs have been impacted.

“It’s no big secret COVID reared its ugly head,” England said. “Run volumes are really down this month, we started watching it tapering down last month, I think we had 302 total runs with just 24 out-of-town runs.”

England explained the reason runs are down is not because of a lack of patients, but because many hospitals are full and cannot accept patients.

He pointed out the supplemental Medicare/Medicaid payments will help offset some of the lost run revenue.