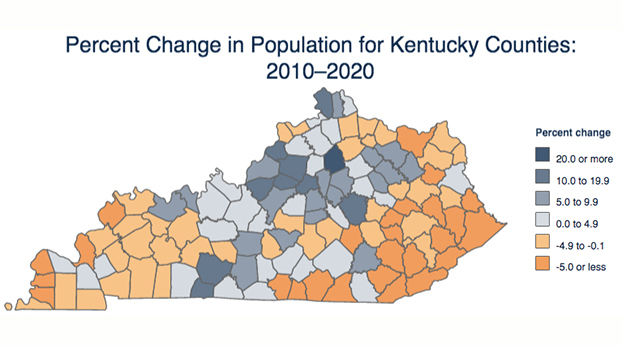 The results of the 2020 census showed Bell County’s population dropped by more than 4,500 people in the last decade, causing some concern about how to stop the downward trend and turn it around. Middlesboro, Pineville, and Bell County as a whole are taking steps to turn the population trend around and replace the income lost when people moved away.

According to Middlesboro Mayor Rick Nelson, the area needs an industry that can take up some of the slack left by the downturn in the coal industry and provide jobs to keep people from leaving Bell County in search of employment.

“We need a home run here,” Nelson said. “We need some kind of an industry that’s going to create not just 50 or 100 jobs, but 400, 500, or 600 jobs to keep people and their families here. In Middlesboro, we went through several cycles. Many years ago, we were a downtown town, and then when the malls came in downtown started slipping, everything went to the mall. Now, the malls are at a standstill, so we’re trying to develop a downtown.

Now, will that keep people here? Probably not. But that will keep entertainment dollars here.”

Pineville Mayor Scott Madon pointed out tourism is playing a big part in the attempts to recover the economy with projects such as the Boone’s Ridge Wildlife Center, concerts, and other events designed to bring people into the area, hopefully to stay.

“The key to it is, not only do you want to get people here but what can you do to keep them here,” Madon said.

“Jacob (Roan, Main Street Pineville Director) and I get to occasionally hear the amazing stories of people who come here for a concert or something, then they fall in love (with the area) and move here.”

Along with tourism, many former coal miners are finding other ways of making a living, Madon explained.

“These coal miners are transforming, learning different trades,” he said. “Here in Pineville a few years ago, with Judge (County Judge-Executive Albey) Brock’s leadership, we were able to get SEKRI into town that makes military clothing and tents and employs about 70 or 80 people.”

Madon said Pineville did feel the impact of lessening population early on, but things have improved in some ways.

“Now that we’ve got our town square fully occupied, and we’re getting ready to do a $6 million plus project, there’s a lot of enthusiasm and excitement,” Madon said. “I know from talking to the locals their business is good, there’s no doubt that some of them have suffered through some of this, but I think overall our folks have held on through the pandemic and are doing fairly well.”

Brock is optimistic about the outlook for the future in Bell County is good.

“In my humble opinion we have survived the worst possible fiscal conditions anyone could have imagined over last decade and are well on our way to growth into the future,” Brock said. “I’m excited about the future of Bell County.”