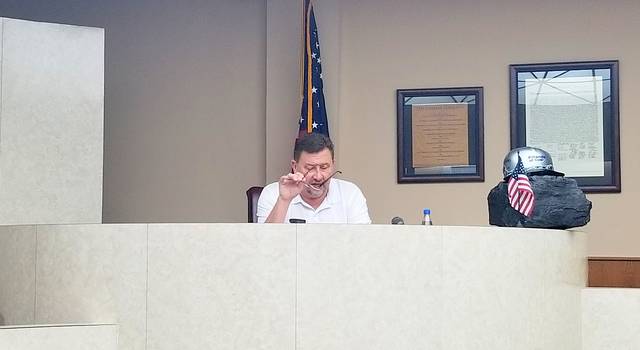 The Bell County Fiscal Court addressed a question about some county pay rates during a recent meeting.

Toward the end of the meeting, Bell County Judge-Executive Albey Brock  responded to a question presented by Brian O’Brien of WRIL FM on behalf of citizens concerning the rate of pay for some county employees.

“I have been asked to ask this question,” O’Brien said. “One of the main concerns is the animal shelter and the jail, as far as pay. Is there any way that the county – and I believe I remember a comment from you (Brock) from about two years ago that you had checked with some of the other detention centers and jails and the pay was commensurate with what they’re doing – is there ever a time you see taking that $7.25 an hour and getting it up?”

Brock explained the county is looking into the issue.

In other court activity:

• A motion was approved to pay bills and make necessary transfers.

• The court accepted the Bell County Treasurer’s financial statement for the previous month.

• The court accepted the Bell County Sheriff’s claim sheet for fee account for the previous month.

• The Bell County Treasurer’s annual statement for 2020 was accepted subject to audit.

• The court accepted excess fees in the amount of $2,933.29 from Bell County Clerk Debbie Gambrel, subject to audit.

• A resolution approving a pay resolution in the amount of $10,000 for the Community Development Block Grant (CDBG) for the Bell County Community Action Agency was approved.

• A motion to accept checks from Bell County Sheriff Mitch Williams in the amount of $36,116.34 was approved.

• A motion to accept checks in the amount of $23,161.75 from Bell County Clerk Debbie Gambrel was approved.

• The court accepted the Bell County Treasurer’s annual settlement for 2021 subject to audit.