White is one of the top running backs in UK history 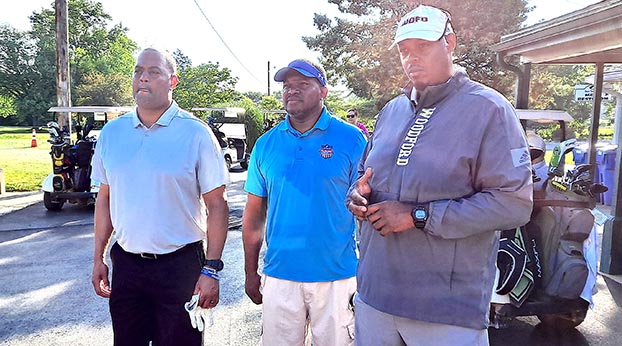 Anthony White, center, with former UK teammates Anwar Stewart and Dennis Johnson this summer. White is one of the best runners/receivers ever to play at Kentucky but is not in the UK Athletics Hall of Fame. (Larry Vaught Photo)

Anthony White ran for 1,758 yards and 11 touchdowns from 1997-99 and averaged 4.8 yards per carry. He still ranks 13th on UK’s all-time rushing list. During those same three years with Tim Couch and Dusty Bonner at quarterback, he caught 194 passes for 1,520 yards and eight scores while averaging 7.8 yards per catch. The only UK players with more catches are Craig Yeast (208) and Derek Abney (197).

White is also ninth on UK’s all-time career receiving yardage list with his 1,520 yards and two of those ahead of him — Yeast and Quentin McCord — were his UK teammates in the Air Raid offense. White’s 78 catches in 1998 are the fourth-best mark at UK behind James Whalen (90), Yeast (85), and Randall Cobb (84).

Couch, Yeast, Cobb, and Abney are all in the UK Athletics Hall of Fame. White is not but count UK defensive line coach Anwar Stewart, White’s one-time teammate, and Tony Franklin, White’s position coach at UK, among many who think he should be.

“I found him to be humble, considerate, a moderator of sorts between personalities on the sports talk show he was co-host of. He was truly surprised when he found that there was a mural of him at the football center/stadium,” McNece said.

“He mentioned once that he never got a game ball. Considering all he had done for the football programs he has been with I thought that a shame. I bought him a football and wrote his accomplishments on it. I honestly think he was genuinely and positively affected by my gift.

“Time and time again Kentucky, Lexington specifically, honors the wrong things, saves the wrong buildings, and doesn’t appreciate what we have. What a nice gesture to add Anthony to the Hall of Fame. He richly deserves it.”