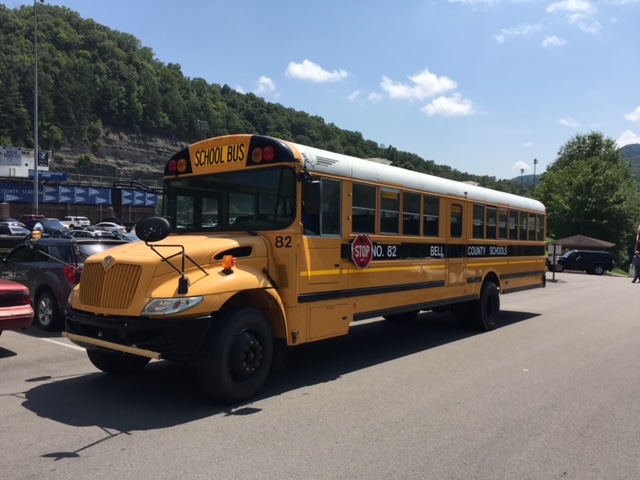 With school returning to session across the country, Bell County School buses are up and running the roads again. The buses themselves are newer and better equipped than many may remember.

Bell County Schools Superintendent Tom Gambrel talked about the condition of the buses in a telephone interview.

According to Gambrel, currently all buses in use on a daily route are now less than 15 years old.

“We have a few spares that are (older), but not many,” Gambrel said. “It’s just a phenomenal turnaround.”

Gambrel said multiple grants were obtained to offset the cost of the new buses.

“We have 45 routes, so we’ve purchased a good number of buses over the last 9 years,” Gambrel said. “We were able to purchase 13 new buses this year.”

Gambrel pointed out the new buses all have air conditioning and auxiliary heat.

“Last year, there were two different opportunities,” Silcox explained. “The first one was through the state, it was part of the Volkswagen Emissions Settlement.”

“If you scrapped a 2000 or older bus that was used on a daily route, they basically would give you 50 percent of the value of a new bus,” Silcox explained. “So, it was approximately $40,000 a unit, and we had two. It’s basically a buy one, get one free deal, since they paid for half of the two buses.”

Silcox said a Dera grant from the EPA (Environmental Protection Agency) was also utilized to obtain another 10 buses.

“This is the third time that Bell County’s received it,” Silcox said. “What that basically does, for any school bus that’s a 2006 or older they will give you $20,000 per diesel bus that you scrap. We were awarded the maximum, which was 10 units which comes to $200,000, so we ordered 10 units and basically got two of them free because of the rebates.”

“They’ve been replaced with new school buses,” Silcox said. “Bell County at this time probably has one of the youngest fleets in the state as far as the buses we have on our lot.”

Silcox mentioned that soon the majority of buses in use in Bell County Schools will be 2016 or newer models.

“They’re at a conditioning shop in Georgia now, they’re finalizing them,” Silcox explained. “They’ll be coming to Lexington then they’ll make their way down here.”

Silcox added two of the buses have already arrived.