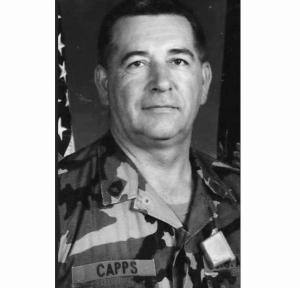 Sr and Nellie Gilbert Capps in Middlesboro, KY. He graduated from Bell County High School in 1965 and from Greenleaf Business College in Atlanta, Georgia and believed in the Baptist faith.
Ottis joined the Kentucky National Guard in 1967 and served ten years at the Middlesboro Unit, he was offered a full-time position in the Administration at the Harlan Armory where he spent the next thirty years with Company A,1-149th Infantry ending his career at 1st Sergent. Ottis was very proud of his unit and took special interest in all his men that passed thru the Armory doors. One of his proudest moments was when his unit “The Mountain Warriors” was deployed to Fort Bragg, N.C. under the operation Noble Eagle in response to 911 activity. He served The National Guard and our Country from 1967 – 2007. Upon his retirement he enjoyed golf, reading, crossword puzzles and spending time at his camper at the lake but most of all enjoying his grandchildren.
In addition to his parents, he is preceded in death by his siblings, Charles “Pat” Frye, Calvin Capps Sr, Esco Capps Jr, and Stella Capps Mason Sqourakis.
He is survived by his wife of 52 years, Sherry Emmett Capps; his sons, Jeff (Cristal) Capps and Jason Capps. His treasured grandchildren, Jase, Bryleigh, Braxton and Camden Capps. Also, his bonus grandchildren that he loved as his own, Jordan and John Brady Brock. One brother, Carl Ray (Donna) Capps of Ewing, VA and his sister, Mary “Skeet” Southern (Maxwell) of Middlesboro, KY and a host of nieces, nephews, family and friends.
Funeral services will be held on Tuesday, August 10, 2021, at 7 o’clock in the Chapel of Henson & Rich Funeral Home with Rev. Danny Robbins officiating and musical selections by Seth Carmical.
Full Military Burial Services will be Wednesday, at 1 o’clock at Green Hills Cemetery in Middlesboro, KY.
The family will receive friends Tuesday from 4PM until the funeral hour at the funeral home.
Honorary Pallbearers will be: George “Sonny” Long, Archie Jenkins, John Luttrell, Chris Jackson, Jason Begley, Todd Hensley, Fred Sergent, Danny Souble, Pat Carter, Rusty Bailey, Gordie Hinkle, and all his men of 1st Battalion 149th Infantry Mountain Warriors.
In lieu of flowers memorial contributions suggested to Harlan County Honor Guard P. O. Box 704 Harlan, KY 40831
Arrangements have been entrusted to Henson & Rich Funeral Home.