Stewart appreciates past success but wants Kentucky to make history 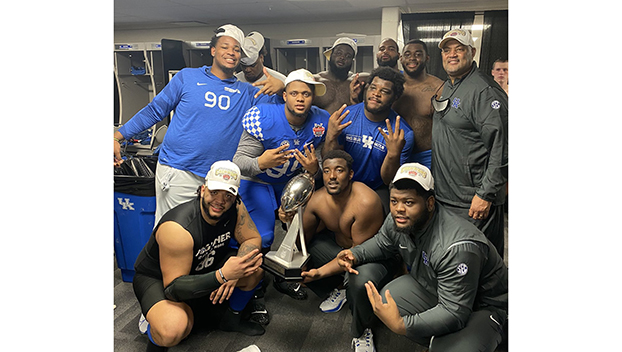 If you ask Anwar Stewart about his blocked field goal against Alabama in 1997, he will downplay the significance of what he did. However, he returned that block 68 yards for a touchdown in UK’s overtime win over Alabama that touched off a wild post-game celebration where the goalposts came down.

Stewart, a linebacker/defensive end at UK, went on to a 13-year professional career in Canada including four Grey Cups.

Now he’s the defensive line coach at Kentucky and is not prone to talk about his play.

“I don’t make it about me. I tell guys my time is up. God blessed me with an understanding of the game. My job now is to help them and educate them so they can be successful,” said Stewart, “It ain’t about me but sometimes when you recruit kids they want to know how you can develop them.

“I played at the next level for a long time. I am not a guy who just read a book or went to a (coaching) convention and is now supposed to be an expert coach. I did that but I also played a long time. Big Dog (UK recruiting coordinator Vince Marrow) teases me that I want to be the best DL coach in the country. That’s why I work so hard. I want players to get better. I don’t know all the answers but I know where to go to get them.”

But what about that field goal return and win over Alabama?

“That was a big part of Kentucky football and history at the time. It was a great time for us and one of the few times we had gone to back-to-back bowls,” Stewart said. “I am trying to beat Georgia, Florida, Tennessee in the same year and do things we have not accomplished in a long time, or maybe never.

“We are ready to go. We are trying to build on what we have now and not the past. It is always nice to go back and reminisce. It was a great time. But let’s go beat Alabama now and then I will talk.”

Stewart said it has been “electric” around the UK football facility getting ready for the upcoming season.

“Our guys are doing a hell of a job in the weight room. Guys have stepped up and competed against each other to make us better. We are just sharpening all those tools that we can,” the Florida native said.

Stewart insists he has “patience” with his players to help develop their talent but has little patience with less than 100 percent effort.

“If you don’t come with that want-to, that is where I have an issue,” Stewart, who returned to UK for the 2020 season after one year at Appalachian State, said. “I always tell guys if they will give me effort then I will develop them into the player they want to be. If a guy isn’t doing that, I have to figure out why and how I can help him come with passion and the love for the game it kicks.

“If you don’t have that, you should not be here. This is the SEC and a grown man’s league. I tell them there are so many guys around the nation who would love to be where you are. I tell my guys you don’t have to do this but you get to do this. Take advantage of the opportunity you have and that’s what I think we have guys ready to do this season.” 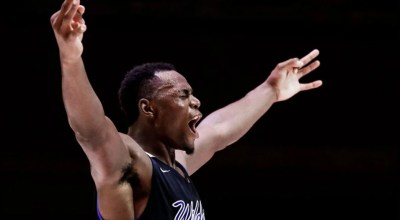