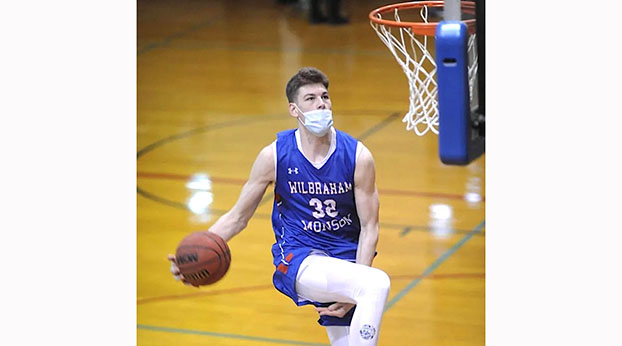 He might be 6-11 but forward Kyle Filipowski can hit 3-pointers and handle the ball so well that he is a matchup nightmare for opponents. (Wilbraham & Monson Academy Photo)

He might have the size of a center but 6-11, 230-pound Kyle Filipowski has the skills that immediately impressed Kentucky coach John Calipari when he saw him play.

“Kyle doesn’t play center. He is a forward,” said Mannix. “If my boy is a center he is the best ball-handling center basketball has ever seen.

He is 6-11 but we put him in ball screens where he is the ball handler. He’s as versatile as he can be.”That includes being able to knock down 3-point shots.

He’s currently a top 50 player — he was not even ranked among the top 125 on Jan. 1 — in the 2022 recruiting class who is likely to move up after his summer play He made official visits to Duke, Indiana, Iowa, Ohio State, and Syracuse last month as well as unofficial visits to Northwestern and Connecticut.

Filipowski averaged 21 points, 13.2 rebounds, and 5.2 assists per game in an abbreviated junior season for Wilbraham & Monson and was named Massachusetts Gatorade Player of the Year. As a sophomore, he had 30 points and went 15-for-15 at the foul line in the New England Championship game and was named tourney MVP.

The four-star forward has been seen as a Duke lean by many recruiting analysts but Mannix had explained to him that Calipari often did not offer players as early as some schools and that a UK offer could be coming. Mannix knows Calipari and one of his former players, Wenyen Gabriel, played for Kentucky and is now in the NBA.

“I still think there is time for Kentucky and that Kentucky got in with the offer at a good time,” the veteran coach said. “Kyle took five official visits in June and had a busy schedule. Those junior visits are impactful, maybe more so than a lot of people think. Maybe now it’s also because kids were locked down so long and can’t wait to get back out there. Now Kentucky sees him and offers.

“He can still take five more official visits (one is already scheduled to UCLA) as a senior and a Zoom call just cannot do Kentucky justice like an official visit can.”

While Calipari had not seen Filipowski play until this month, his staff had. New assistant coach Orlando Antigua came to a game in 2019 with Illinois head coach Brad Underwood just a few months before the pandemic hit.

“They were looking at our guys and guys on the other team but they liked him a lot,” Mannix said.

Current UK assistant coach Bruiser Flint was still at Indiana when Mannix reached out to him about Filipowski, who turns 18 in November.

“He watched all our playoff games and Bruiser said he could absolutely play at Indiana or a lot of places,” Mannix said. “So Orlando and Bruiser have known about him but mainly from when he was a sophomore. I don’t think he’s going to make a college choice until after our season starts but he has a lot to think about the next few months.”

Filipowski asked Calipari directly what kind of role the coach envisioned for him at Kentucky and got the answer he wanted — a stretch forward who can play on the perimeter with a more traditional big man inside.

“That was important for Kyle,” Mannix said. “What I love about Kyle, and it hit home with Cal, is that Kyle is a winner. He will do whatever it takes to win. He makes plays from the perimeter but will also post up. We might set up a play out of a timeout with him having his back to the basket and he’s not averse to that.

“He will post up with no problem and is a nightmare of a matchup for most teams. He will drive by a center on the perimeter and he can post up a smaller player. He’s that versatile and he handles the ball so well. There’s nothing ordinary about him and Cal talked about the matchup problems he could present.”

Mannix thinks Filipowski will continue to improve in college, too, as he adds muscle.

“He’s about 230-ish now. Looks good. You don’t look at him and say he’s slight,” the coach said. “You are looking at a kid in two years who has probably put on 20 pounds and can put on another 10 pounds of muscle his freshman year in college. When he does that with the versatility he has, he’s just going to become even more of a matchup problem for teams.”

Calipari and his staff had planned to watch Filipowski, who has over 30 scholarship offers, play again at Peach Jam in Georgia last week but he tested positive for COVID and did not get to play.

UK alum McLaughlin on quest for gold in Tokyo

Former Kentucky hurdler Sydney McLaughlin will begin her quest for an Olympic medal Saturday in the 400-meter hurdles in Tokyo... read more