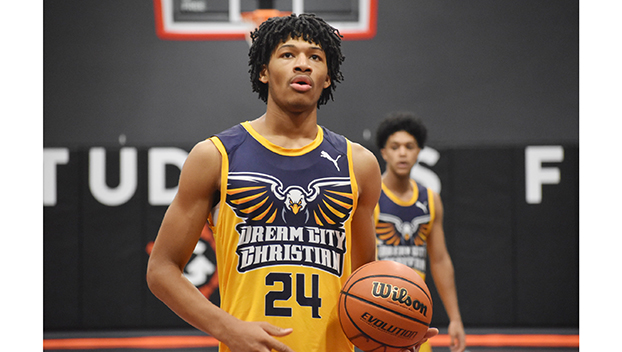 While there was a lot of focus on Illinois big man Kofi Cockburn not transferring to Kentucky and what high school sensation Jalen Duren will do about college, coach John Calipari has not lost track of 6-5 senior shooting guard Shaedon Sharpe of Arizona Compass.

The Canadian is a top 10 player in the 2022 recruiting class by 247Sports and No. 11 on Rivals.com. Sharpe made an official visit to UK in June — his only official visit — and is friends with UK commit Skyy Clark, who recently tore his ACL and will not play again this summer.

Sharpe has ties to Kentucky as his summer team director and basketball mentor, Dwayne Washington, coached former UK star Shai Gilgeous-Alexander who is now shining in the NBA.

“Shai had a lot of goals but I really thought it would take him longer than a year (at Kentucky) to be ready for the NBA,” Washington said. “He still has goals left but he knows it is a process just like Shaedon does.

“Shaedon has taken care of his body and got stronger and wiser just like Shai did. Shai is climbing and his skills are on a steady incline mainly because of the process he has stuck to. It’s similar with Shaedon.

Shaedon has more pops because of his athleticism. He shoots more like Jamal (Murray). He’s more athletic like a mini Vince Carter.

“He has worked a lot on his midrange stuff, playing defense, rebounding. He knows he still has work to do to be ready for the next level.”

Olaus Alinen believes that the University of Kentucky football coaching staff saw a “great opportunity” when he was offered a... read more