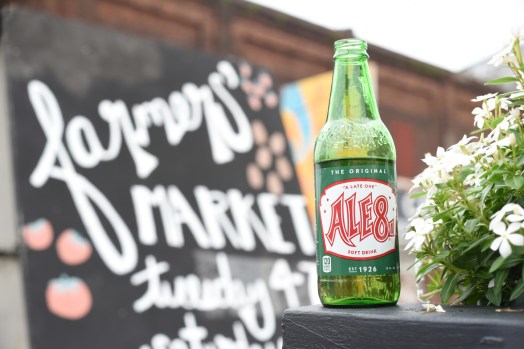 Ale-8's 95th anniversary was enjoy by company staff with a barbeque and Axe-throwing. Market director Chris Doyle accredit's the brand's longevity to its commitment to the community. – Photos submitted 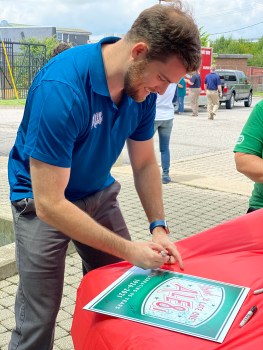 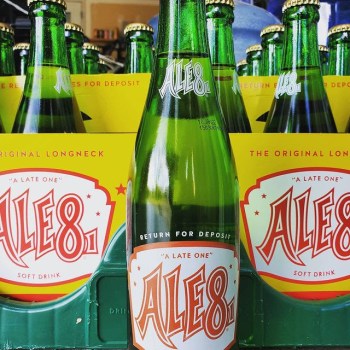 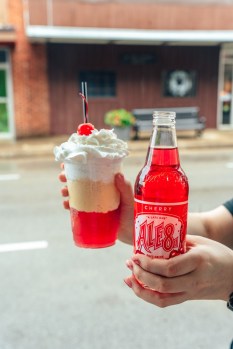 Kentucky’s own signature soda brand is celebrating its 95th anniversary.

July 13 marked the birthday of Ale-8-One, which calls Winchester home and is colloquially known as “Ale-8.” The ginger and citrus-based soft drink was concocted by George Lee Wainscott, who previously introduced Roxa-Cola in 1906. Roxa-Cola was named after Wainscott’s wife, Roxanne, and ended up the subject of a lawsuit battle with Coca-Cola, who alleged the soda was an infringement of trademark. This suit was won by Wainscott, who would continue in the independent soda business.

Wainscott discovered ginger beer during a trip to Europe, inspiring him to work on the recipe that would become Ale-8. This recipe was introduced at the 1926 Clark County Fair, drawing attention with a concurrent contest to name the new soft drink. Based on 1920s slang for “the latest thing,” the name “A Late One” won, with the phrase still engraved on Ale-8 bottles to this very day.

In celebration of the anniversary, staff at the Ale-8 bottling company enjoyed a barbecue and axe-throwing. What the company truly wants to recognize, according to Ale-8’s marketing director Chris Doyle, is the brand’s heritage and the community that has supported it for nearly a century.

“There aren’t many independent soft drink brands that still exist because the market is dominated by two global giants,” he said, “It’s our communities where we have been able to grow such a successful brand over 95 years. We listen to our consumers, whether it’s our guys out delivering product, or on social media where we have a tremendous following.”

It was on social media that the brand learned of people mixing cherries with Ale-8, leading to the launch of the cherry Ale-8 flavor in 2018.

It was also through social media requests, Doyle adds, that Ale-8 Zero Sugar and the seasonal orange cream Ale-8 came to be.

“We’ve got some fun new products, but we’re not far enough along to introducing them quite yet,” explained Doyle, “but we have several that we have been working on and tasting internally, and we are expecting to have something new by next summer.”

“Anything that involves Kentucky and the community, we strive to give our support,” Doyle said. “We have such a passionate following here in Winchester and we certainly have fans throughout the state. But we want everybody in Kentucky to feel the way about Ale-8 that our hometown does.”

Doyle accredits the success of Ale-8 to its closeness and participation with the community, and the company’s efforts listening to fan feedback. He said Ale-8 fans can make their voices heard on Facebook, Instagram, Twitter, and the comments section on ale8one.com.

“We plan to continue listening to our consumers and our fans, really staying close to them. That’s what kept us around for so long,” Doyle concluded.