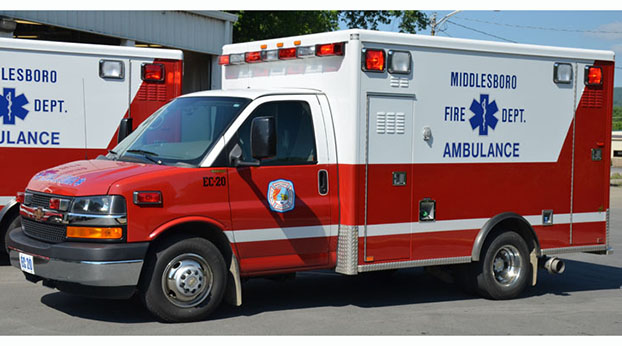 Emergency services ‘up to par’

The Middlesboro City Fire Department/EMS’s ambulances and crews received a 100 percent compliance rating from their annual Kentucky Board of Emergency Medical Services inspection on Tuesday.

Middlesboro City Fire Chief Robert England shed some light on the process the department must go through to pass inspection.

“The KBEMS is the licensing agency for any ambulances in the state of Kentucky,” England said. “They are the ones who oversee and make sure all the protocols are being followed correctly and all supplies and equipment that is necessary is actively on the trucks and in working order.”

England explained KBEMS also keeps track of items such as licenses for ambulance personnel. The department has a total of five ambulances and 27 staff members that are subject to KBEMS requirements.

“They (KBEMS) keep up with all the documentation for every licensed EMT or medic…that works at our service – or any ambulance service – to make sure their credentials are up to date and accurate, and that their training is up to par,” England said.

England also mentioned some of the areas KBEMS inspects.

“The first thing they usually look at is the vehicle tires and inspect them to make sure they are roadworthy,” he said. “When they get into the back they look at everything from band-aids to gauze rollers to needles, monitors, and everything else to ensure everything is in date and adequate for use.”

He said the inspection began at approximately 9 a.m. and was concluded by 1 p.m. on Tuesday.

England said the KBEMS standards do not allow for any deficiencies.

“You can’t have any infractions,” he said. “Each ambulance has around 120 checked items they have to run through, and there can be no deficiencies on that. If they find one, they do allow you to take care of the deficiency and move up into compliance, but you can be charged for them coming back to reinspect.”

The department passed all required areas of inspection on the first attempt.

“It’s a pretty big deal when you come in with five ambulances and 27 guys with all their paperwork and you come in with zero deficiencies on the first day,” England said. “We’re proud of that. It just goes to show what we’re doing here at the department and how we’re keeping everything updated to the standard of care that KBEMS requires.”