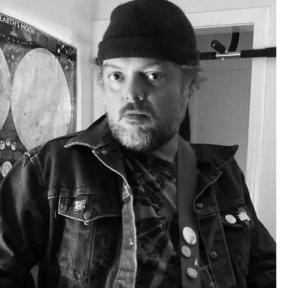 t his home in Pineville, KY. He had recently moved to Pineville from Austin, Texas where he had lived for the past 15 years. Brandon had a passion for music and was music producer, and concert organizer.
Brandon was born on February 5, 1981 at Pattie A. Clay Hospital in Richmond, KY. He grew up in Berea, KY where he attended Madison Southern High School.
Brandon is preceded in death by his grandparents: Edward and Marie Hamilton of Berea, KY and Charles and Julia York of Trenton, Ohio; a sister, Ashley Beth Combs of Middlesboro, KY; an aunt, Carla Hamilton of Berea, KY; an uncle, Kenneth Hamilton of Edgewood, MD and a cousin, Thomas Hamilton of Edgewood, MD, and the love of his life, Skye.
Brandon is survived by his son, Rylee Hamilton of Caledonia, Mississippi; his father, David Hamilton of Berea, KY, his mother, Vicki (Terry) Thompson of Middlesboro, KY; a sister, Jennifer Benge of Berea, KY; a brother, Ryan Hamilton of Middlesboro, KY; several aunts, uncles, cousins, nieces, nephews, and his cat, Meatball.
A celebration of his life will be 7 p.m., Thursday, July 1, 2021 at Shumate Funeral Home Chapel in Middlesboro, KY. The family will receive friends 5-7 p.m., Thursday, July 1, 2021 at Shumate Funeral Home Chapel.
Shumate Funeral Home is honored to serve the Family of Brandon Hamilton and is entrusted with all arrangements.
Candle Lighting and Guestbook at www.shumatefuneralhome.com