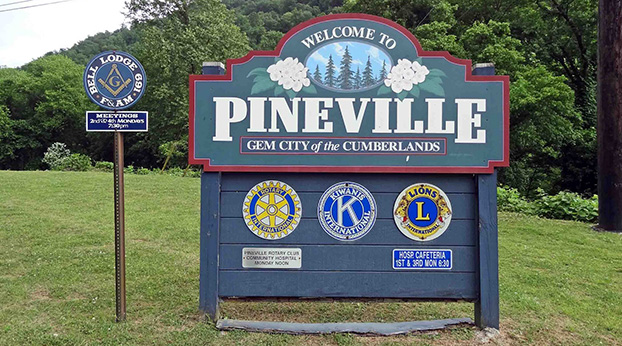 The city of Pineville held a community meeting recently to get the public’s feedback and suggestions on a renovation project that has been in the works for the city.

Pineville City Mayor Scott Madon addressed an interested audience at the Bell Theater in downtown Pineville during a meeting designed to the solicit reactions and suggestions from the community.

“We’re dealing with two different engineering firms,” Madon said. “This will give you an overview of how this project started.”

Madon said approximately 12 years ago, the city of Pineville, along with other cities in the area, was cited by the Environmental Protection Agency (EPA) for sewage overflowing into the Cumberland River.

“This is just another leg of it. By no means is it over, because we’ve got other side streets, we’ve got the hills that still have combined storm and sewer lines. So, what that means is when it rains real bad our sewage and stormwater runs together, and it runs into the river. We’re going to separate those as part of the EPA mandate.”

Madon explained the project means new water lines, new sidewalks and free public WiFi around the courthouse square along with other upgrades.

“Just a lot of updating downtown,” Madon said. “We’ve got four different funding agencies in it…we’ve got a 2.6-million-dollar loan and they gave $1 million of it, so we have to pay back $1.6 million. The city’s bonded $1.5 million that will be paid back out of our restaurant tax.”

Madon explained the rest of the funding is made up with a $1 million grant along with a $704,000 ARC grant.

“It’s about a $6 million project if we don’t have any cost overruns,” Madon said.

After the mayor’s introduction, Liz Piper and Billie Motsch of Element Design in Lexington were on hand to give some insight on multiple ideas for the design of the project.

The audience was shown projections of ideas of what the Courthouse Square may look like when the project is finished. Following the presentation, community members were invited to comment on which parts of the proposed designs they liked best.

A Middlesboro man is facing charges including trafficking methamphetamine after allegedly being found in possession of the drug. Mark Carrol,... read more