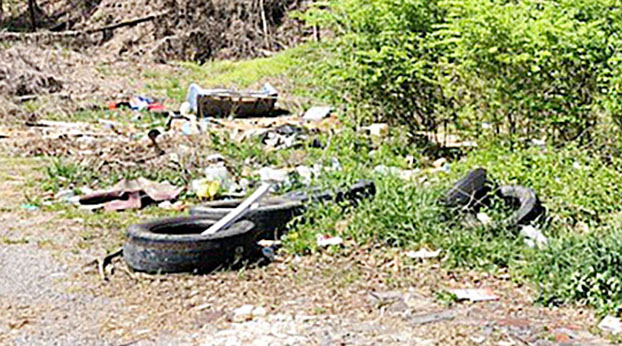 Roadside dumps like this one are far too commonly found filled with tires and other trash.

The Bell County Fiscal Court responded to multiple concerns from around the county during a recent meeting, including questions about a report of illegal garbage dumping and the possibility of inmates becoming available for work release following the lifting of most COVID-19 restrictions in the state.

Bell County Judge-Executive Albey Brock responded to an inquiry about illegal dumping early in the meeting.

Brock noted that while dumping is illegal, it can be difficult to catch offenders in the act of illegally dumping refuse.

“It’s illegal to dump,” Brock said. “You could contact the sheriff’s office, but we all know how difficult it is to catch somebody dumping.”

Brock pointed out illegal dumping tends to occur during hours when not many people are out.

“They’ll go at 1 a.m. when everybody’s in the bed, dump it out, and they’re gone,” Brock said. “It’s a problem. It’s a shame we have to even talk about it. I feel the enforcement for illegal dumping is the primary function of the 109 board.”

Brock said the next step would be to contact the county attorney.

“If he knows who did it, I would get with the sheriff’s office, too,” Brock said. “Any law enforcement officer can cite someone for dumping.”

Brock also talked about the possibility of inmates being utilized for work release following Gov. Andy Beshear’s lifting of most

“We don’t know yet,” Brock said. “We hope so. We’re ready for them. If they’ll free them up and let us use them, we’ve got plenty of work for them to do.”

In other court activity:
• The court asked for comments concerning County Road Aid and Local Economic Government Assistance hearings. No comments were made.

• The salaries for all county employees were approved.

• The Bell County administrative code (no changes) was approved.

The lineup for this summer’s Levitt Amp Concert Series in Middlesboro has been released, revealing a wide assortment of musical... read more