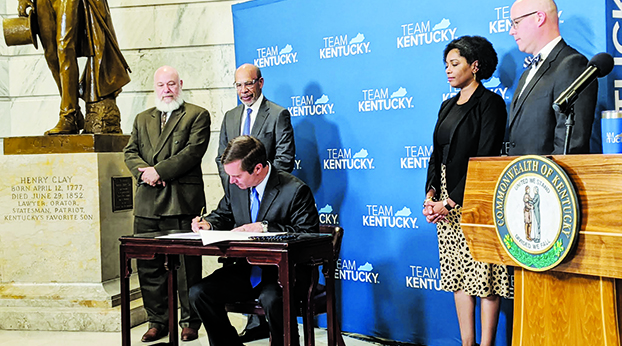 At last regular COVID-19 press briefing, Beshear says crisis is over but pandemic is not; rescinds most restrictions, reflects on fight

In his last regular COVID-19 press conference, Gov. Andy Beshear lifted the statewide mask mandate for most settings, ended capacity limits for businesses and venues, and ended the state’s “healthy at work” requirements, citing an ever-increasing number of Kentuckians getting a coronavirus vaccine as the reason these changes could be made.

“Let me be clear, COVID-19 remains deadly. Our war against it is not yet won,” Beshear said Friday. “But after more than 15 months of struggle and of sacrifice, we can also say this: While Covid remains a threat, we are no longer in crisis.”

Later in the afternoon, the Kentucky Department of Education said in a press release that in line with the governor’s executive order, it would rescind the state’s “healthy at school” guidance as well, meaning that the use of masks and social distancing is no longer mandated.

Beshear said he has held 250 COVID-19 news conferences Since the first one on March 7, 2020. Now, he said he will shift to a weekly news conference, but on various topics.

His executive order says masks are still required in high-risk places, such as public transportation, health-care settings, and nursing homes, and are recommended in correctional facilities, homeless shelters, and for anyone who is immuno-compromised, exhibiting symptoms of COVID-19 or has tested positive for it in the previous 10 days.

Beshear said any business that wants to continue requiring masks can do so, and called on Kentuckians to be patient with one another as people work through these changes.

Beshear spent many minutes recounting the state’s 15-month fight against the coronavirus (“a story of our goodness”) and thanking his team and other Kentuckians for hard work and many sacrifices, saying they allowed the state to beat back three waves of infection and avoid having its hospitals overrun with COVID-19 patients.

“We know that our actions saved thousands, likely tens of thousands, of lives,” he said. Later, asked what he might have done differently, he said, “I think we’ve done more things right than most states.”

Some Republican state senators said Thursday that Beshear should also end the state of emergency that gives him special powers.

He told Louisville’s WLKY-TV that he would probably maintain the emergency as long as the federal government does, to take advantage of possible federal aid.

Kentucky Health News asked Beshear what he would say to those who think the pandemic is over. He didn’t directly answer, instead thanking those who were vaccinated, saying their risk is very low. To the unvaccinated, he said the state has shared plenty of information about the vaccines and it is now up to them.

“If you are not vaccinated, we have talked over and over and over about how to protect yourself from this virus and you’ve had the personal choice now either to get the protection of the vaccine, or to take the steps that we know can protect you,” he said. “So to everybody out there, just do right thing.”

More than 2.1 million Kentuckians have received at least one dose of a vaccine, or 47% of the total population. Centers for Disease Control and Prevention data show 55.8% of the eligible population, 12 and up, is fully vaccinated.

Last week Kentucky opened up a lottery-style incentive for people with at least one dose. It will give three Kentuckians $1 million each and 15 students higher-education scholarships. Beshear said about 370,000 people have registered for the drawings at shotatamillion.ky.gov. The first drawing will be July 1; registration covers all three drawings.

Daily numbers: In his final such report, Beshear announced 237 new cases of the coronavirus, bringing the seven-day rolling average to 284, the lowest in just over 11 months.

Kentucky hospitals reported 270 COVID-19 patients, with 72 in intensive care; and 35 of those on a ventilator, continuing a long downward trend.

Two of the state’s hospital readiness regions are using at least 80% of their intensive-care beds: the easternmost, from Lee to Pike counties, at 80.15%; and Lake Cumberland, at 88.89%.

The state reported nine new COVID-19 deaths, bringing its toll from the disease to 7,147. Beshear said one was vaccinated, roughly reflecting the vaccines’ 90% or greater effectiveness. He said the larger-than-average number of deaths the last two days (12 and 17) reflected old cases that needed additional documentation for confirmation. The state is averaging about seven COVID-19 deaths per day.