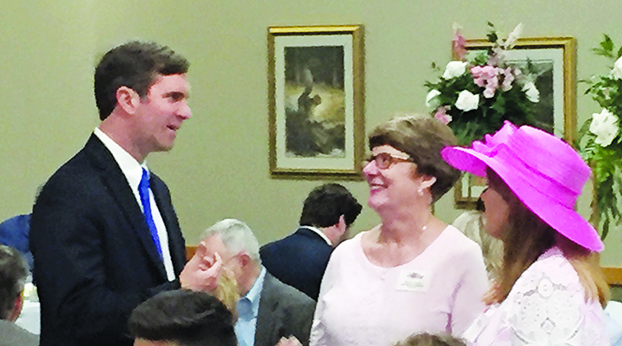 Governor Andy Beshear made an appearance in Pineville last weekend speaking to a lunchtime crowd at the Pine Mountain State Park Lodge, touching on the state’s economic position as the COVID-19 pandemic eases.

“After a tough 15 months, we’re still here,” Beshear began. “We’re not only still here, we are getting back to normal.”

Beshear noted one of the signs of a return to normalcy was the Kentucky Mountain Laurel Festival taking place.

Beshear pointed out that in times of crisis, people pull together.

The governor then addressed how the pandemic has impacted the people of Kentucky.

“I still feel the emotions from the last 15 months,” Beshear said. “I still feel grief for the…Kentuckians we’ve lost. I still feel stress, how this has changed our lives and affected my kids and everybody else’s kids and grandkids.”

The development of vaccines and other factors have given Beshear a positive outlook for the future.

“I believe the fact that 15 months after our first case of COVID we have had 2.1 million Kentuckians vaccinated, that’s a miracle from God,” said Beshear. “Our economy is roaring back. We have gotten more good news in the last month than I could have ever imagined.”

“Even in the midst of the pandemic, Site Selection magazine ranked Kentucky number one in our region,” Beshear said. “They ranked us number one for any state with under 5 million people. They ranked us number three per capita. I’ll tell you what, take out the per capita. Put us in direct competition with New York, California, Florida, or Texas, you pick. We were number seven in the country.”

Site Selection Magazine is a publication that covers corporate real estate, facility planning, and location analysis, according to https://siteselection.com.

“Moody’s came out – and I didn’t know ratings agencies used these types of terms – they say our economy is rebounding with gusto,” Beshear said.

Beshear added Kentucky has seen prosperous times previously, but not everybody benefited.

The Bell County Health department reported no new cases of COVID-19 in the county on Wednesday. With no new cases... read more