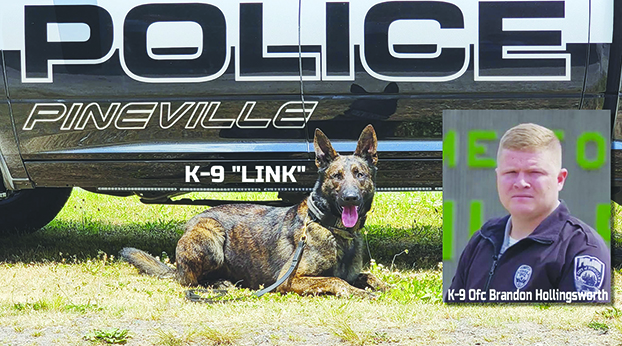 The Pineville Police Department has added to their ranks, with Dutch Shepherd “Link” now a part of the team.

According to a press release, Middlesboro City Police K-9 Officer Brandon Hollingsworth is teamed up with Link, and the pair will be working together to serve the community. Hollingsworth and Link make up the first K-9 unit in the history of the Pineville City Police Department.

The Pineville City Police Department acquired Link from Morristown, Tennessee, where the K-9 completed all the required training and certifications to serve as a police K-9. Link completed the process on April 29.

In a telephone interview, Hollingsworth explained he and Pineville City Police Chief Kyle Dunn both liked the idea of acquiring a K-9 unit for the department.

“We went and asked the Mayor (Pineville Mayor Scott Madon), and he gave us the approval,” Hollingsworth said. “We contacted Dan Cliff out of Morristown…and told him we were interested in a dog. We wanted a single-purpose dog for narcotics detection and tracking. About a week later, he contacted us and told us he had a dog.”

Hollingsworth said he went to Morristown on January 21 and picked Link up and brought him home for about two weeks.

“Then, we went down and trained with Dan (Cliff) for a couple months, and now we’re certified,” Hollingworth said.

Along with performing narcotics detection and tracking duties for the Pineville City Police Department, the pair will also be helping out other agencies in the area with tasks such as vehicle searches and executing search warrants.

“We are really excited, especially with backing of Mayor Scott Madon and the city council, for the program,” said Hollingsworth.

“Link will be a big asset to our department and the community.”

When not on duty, Link resides at Hollingsworth’s home.

“The city bought Link a really nice kennel,” Hollingworth said. “He lives at my house in that kennel…when we’re not working and we’re at home, we play fetch, let him play with his toys, run around the yard and just be a dog.”

The release also states Link was purchased with funds acquired from money seized in drug arrests made by the Pineville City Police Department. When on duty, link will be transported in a new pickup truck that has been modified with a cooled, well-ventilated space for Link. The Pineville City Police Department purchased the vehicle with tax money acquired from alcohol sales at stores and restaurants within the city of Pineville.

Governor Andy Beshear made an appearance in Pineville last weekend speaking to a lunchtime crowd at the Pine Mountain State... read more