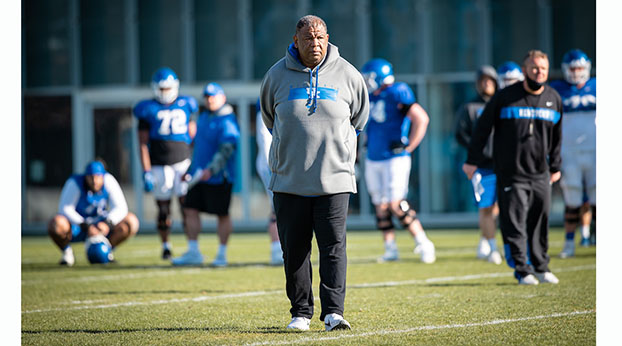 Kentucky football recruiting is on such a roll that when four-star Ohio cornerback Alex Afari verbally committed to UK last week it really did not cause much of a buzz.

“I can remember when if we got a four-star, we would have a video celebrating the commitment,” Kentucky recruiting coordinator Vince Marrow said. “Times have changed.

Kentucky’s 2022 recruiting class is now ranked in the top 10. Who thought that was really possible when Mark Stoops came to UK? Or that any coach could do that.

Marrow says the good times are not close to ending.

“We still got probably seven more guys that are nationally ranked guys that I think we’re about to close in on,” Marrow said before Afari’s commitment.

During his speech at the Louisville Quarterback Club last week, he said UK is “putting a gate around the state and all the top talent is going to stay in Kentucky” and play for the Wildcats.

“That’s what we want to do and as long as we are here we don’t want anybody else signing guys out of Kentucky,” Marrow said. “High school coaches in the state are producing Power-5 guys that can play in the SEC, ACC, or Big Ten. We want to keep them all.”

One in-state player Kentucky did not sign was Louisville’s Rondale Moore. The receiver went to Purdue and was picked in the second round of the recent NFL draft.

“We didn’t recruit Rondale. We didn’t offer,” Marrow said. “I thought, ‘Why didn’t we offer this kid?’ By then it was too late and he was going to Purdue. That’s also when Stoops put me in charge of recruiting the state. It was because of Rondale.”

Marrow doesn’t want to stop with the best in-state talent. Kentucky is having annual success in Michigan, Ohio, and several southern states.

“If you’re an in-state kid or a kid that’s in a six-hour radius, you’d be crazy if you didn’t pick Kentucky,” the UK recruiting coordinator said. “That’s all I’m gonna say. Just look at the product and look at what’s happening.

“Don’t look at that fake stuff. Some people are selling pipe dreams. Kids get to that place and feel like, ‘Man, they just sold me a bad car.’ It’s like a used car salesman that went south. Our product now speaks for itself. The proof is in the pudding.”

“So if you want to leave this state and go somewhere else when you look in your backyard the proof is in the pudding right here. We ain’t stopped and we are not going to stop,” Marrow said.

Marrow said adding offensive coordinator Liam Coen, who had been with the Los Angeles Rams, is only going to elevate UK’s recruiting of skilled players.

“I really do believe Kentucky is going to be one of the top 10 places to be for top recruits because we’re in the best conference in the country,” Marrow said.

Marrow and Stoops started their rebuilding project by going into Ohio for top talent. Now they don’t have to rely on Ohio as much as they once did.

“When (coach) Urban Meyer was there (at Ohio State) he recruited nationally and would only maybe take five guys from Ohio and I would just lick my chops,” Marrow said. “If the guy there now (Ryan Patrick) was there then, all these guys that came here probably would not have been here because he would have recruited them. As soon as he got the job, he started offering a lot more guys from Ohio but we got in there and grabbed some big-time talent to get this thing rolling.”

Kentucky’s six NFL draft picks this year were the most Kentucky has had since the draft was reduced to seven... read more