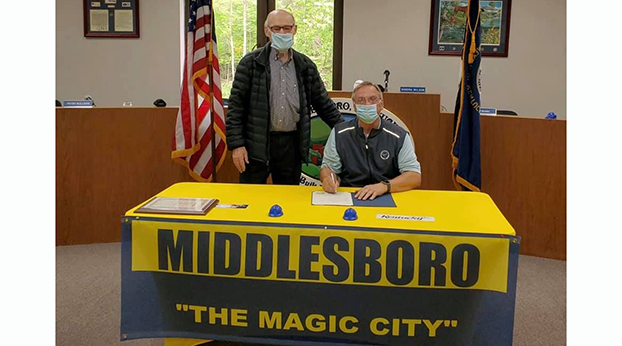 Friday to be Bruce Walzer Day in Middlesboro

Friday, April 30, has been designated Bruce Walzer Day in Middlesboro.

Middlesboro Mayor Rick Nelson signed the proclamation on Thursday honoring Walzer, who is retiring from his position as Bell Baptist Association Director of Missions.

“Bruce is retiring as director of the Bell Baptist Association, but I think he’ll still be around,” Nelson said. “He’s a wonderful individual and a great servant of God. He is a good servant for the people. He preaches funerals when pastors are gone. He never met a stranger. They just don’t make them like that anymore, so we wanted to do something here at the city to help honor him…it’s an honor to know him and I hope he has a good retirement.”

Nelson mentioned he does not expect retirement to slow Walzer down a great deal.

The proclamation states “Whereas Bruce Walzer, a true servant of God, has been a valuable asset to his community and worked tirelessly for the Bell Baptist Association for the past 31 years, and Whereas Bruce Walzer is now retiring as leader of that group…I, Rick Nelson, Mayor of the City of Middlesboro, Kentucky, do hereby proclaim Friday, April 30th, 2021, as Bruce Walzer’s Day, and urge all citizens to honor him for his years of service in this, his special day.”

Nelson added Walzer also received the title of Admiral in the Old Yellow Creek Navy, which is the highest honor the city of Middlesboro bestows upon citizens.

“He works really hard,” Sowders said. “He’s a non-stop guy…he tries to help the churches with whatever they need.”

Folks scrambling to find their birth certificate and other documentation needed to get a REAL ID before the October deadline,... read more