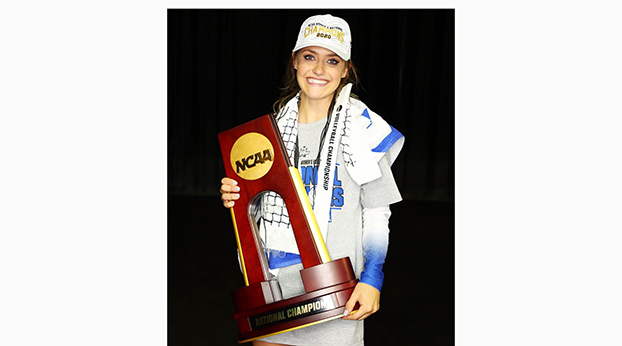 Final Four Most Outstanding Player Madison Lilley holds the national championship trophy after UK beat Texas for its first national title. She said players felt the BBN love all the way in Omaha during the tourney. (UK Athletics Photo)

“Just amazingly proud to live a dream right now,” Skinner said after the win. “Validation of our talk is huge. I am just so thrilled for our current players who believed so much in us.”

One of those players who believed was All-American setter Madison Lilley, the national player of the year. She came to Kentucky talking about winning a national title her freshman year.

“Welcome to the bandwagon everyone,” Lilley said after the championship win. “We have been on it. Volleyball school.”

Lilley knows not everyone took her seriously when she talked about a national championship as soon as she got to Kentucky.

“It might have been cute as a freshman (to say it) but we knew it was going to happen and that’s what makes this all the better,” Lilley said.

She carried the national championship trophy into the welcome home celebration at Memorial Coliseum and that seemed only fair since she had 53 assists and a career-high 19 digs in the national title match.

She averaged 13.8 assists per set in five NCA wins and had six service aces. The senior also averaged 3.35 digs per set and hit above .300 in all five tourney matches.

Lilley was almost giddy addressing fans in Memorial Coliseum at the celebration. She talked about how proud she was of the team and staff but also appreciative of the fans.

“We got to play for BBN in Omaha and felt the love,” Lilley said. “It was the coolest thing to see Memorial Coliseum packed last night (for the NCAA title game watch party). That means a lot.”

Lilley also predicted this won’t be the end of UK volleyball success.

“It (a national title) has been a long time coming. We are here and we are not stopping. I am so proud of this program,” she said.

UK’s Steiner was a two-sport star in high school

Colleges started recruiting her to play soccer when she was only a high school freshman before a couple of years... read more