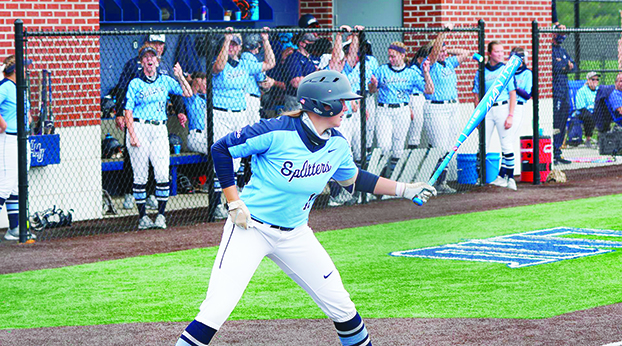 HARROGATE, Tenn. – Wrapping up a season-closing stretch of six games in a five-day period, the 7th-ranked Lincoln Memorial University softball team put the pedal to the metal in Saturday’s opener against the Wingate Bulldogs, before being dealt some of their own medicine in the closer on the 2021 edition of Senior Day at Dorothy Neely Field.

Carrying their home winning streak to an NCAA Division II-leading 28 games in the team’s ninth mercy rule triumph of the semester, the Lady Railsplitters (34-5, 20-4 SAC) scored at least once in all five innings behind 12 hits in a 10-2 dismantling of the Bulldogs to get the day started.

However, Wingate laid a haymaker right back at LMU in the second half of the weekend DH, claiming responsibility for the only time in 39 appearances to hold the blue and gray scoreless on the board in another run-ruled decision, 9-0.

On an afternoon where emotions were high in the final Harrogate standoff for two outstanding Lincoln Memorial seniors, Ty-Kella Goins and Audrey Petoskey, fourth-year Head Coach Ritchie Richardson’s squad takes a bit of a limp into next weekend’s SAC Tournament, suffering the worst home loss since the unveiling of the new field to put a sour tone on an otherwise joyous day.

Racing ahead 3-0 before posting a 7-0 run to end the contest prematurely after the visitors clawed within a single score, the Lady Railsplitters emphatically picked up win # 34 on the season, standing just four away from matching the highest number for a single year in program history achieved two years ago.

Having just grasped their second-ever South Atlantic Conference Regular Season Championship 48 hours earlier in a dominant sweep over preseason league favorite Lenoir-Rhyne, LMU showed no signs of fatigue or inattentiveness throughout Game 1, determined to put the Bulldogs away early. Once Grace Cochran and Madison Henry accounted for three RBI on a leftfield single and sacrifice fly to put the Lady Railsplitters ahead 3-0 with two innings gone, they were well on their way to achieving that goal.

Wingate managed to cause slight unrest in the top of the 3rd on Saturday by virtue of a Haley Cashwell SAC fly ball and Heaven Maness double that pulled the Bulldogs within one run. That 3rd frame would turn out to be the only one out of five in which the visitors were able to tally even a single hit on the board though, rendering the rest of their comeback attempt obsolete.

Junior catcher McKenzie Henry gave the Lady Railsplitters some breathing room in the bottom of that same inning by scoring Webb on an RBI single to the left side, kickstarting a furious blue and gray rally that ultimately sent the Bulldogs in retreat with an eight-run walloping.

A chorus of three scores each over the final two innings ensured LMU’s ninth run-rule W of the spring, as Hucklebee and Webb wrangled in three base-runners in the 4th on a double and single in consecutive at-bats, preceding the early curtain call in the bottom of the 5th on a Goins RBI-double and Hucklebee’s second RBI of the weekend on another base hit.

Ending Game 1 with five hits in the last period, the batting power was nearly outdone by another superb performance in the circle from sophomore Emma Frost, who improved to a remarkable personal record of 16-2 off of only three hits allowed in 18 batters faced. Aubrey Reep was the guilty culprit in the loss for the Bulldogs, throwing nearly the entire outing on 107 pitches.

Gathering their 34th win of the calendar to extend the highest number out of all teams in NCAA Division II, the Lady Railsplitters’ lopsided win brought the total scoring differential against all other teams at Dorothy Neely Field to an otherworldly margin of 142-35 at the midway point of Saturday’s doubleheader.

Game 2 – Wingate def. No. 7 Lincoln Memorial 9-0 (5 Innings)
Unfortunately for the blue and gray, their celebration would be short-lived once the Bulldogs retaliated with a vengeance in Game 2, handing LMU its worst loss in Harrogate since the field was located at a different area on campus back in April of 2016 at the hands of L-R. A nine-run final decision ended the weekend with a 1-1 split in the SAC finale, where the Lady Railsplitters will look to regroup awaiting the league Quarterfinals at a neutral site next Friday.

Only one LMU jersey managed more than one hit in the blowout, as Petoskey went 2-2 at the plate in her final home meeting. A 3-0 hole quickly deepened to insurmountable proportions once Wingate unraveled six unanswered scored in the top of the 3rd, signifying a repeat in mercy-rule terms, only in the opposite direction this time around.

Erupting for 11 hits in just the first three innings, the Bulldogs quickly caused a panic in the LMU pitchers’ unit, where Bailey Griffith was saddled with the loss to drop the junior to a still-impressive 11-3 record. Victoria Conley and Hayley Tamaro both saw time in the circle to try and slow down Wingate’s offensive locomotive, but to no avail.

Maness and Laney McLaurin pushed the visitors to their first lead of the day in the opening stanza on a double and sacrifice fly, where the lead ballooned to 3-0 in the next inning on a double from Ragan Liles. All five of Wingate’s next scores came via an RBI-single, all occurring in the third inning.

Southpaw Sydney Kale gained credit for the victory as the Bulldogs’ starting pitcher, while Cashwell, Maness, Liles, and Sara Stroud racked up nine hits between the four of them in route to serving up LMU’s worst home defeat in five years and one day.

While not exactly the ending they were hoping for to their Lady Railsplitter careers at home, both Goins and Petoskey leave behind an unparalleled legacy in the annals of Lincoln Memorial softball, accumulating 135 wins and counting between the two of them, while combining to represent the Top 10 in 14 different offensive categories throughout the school record books.

Up Next
Suffering their first loss at Dorothy Neely Field in nearly 15 months to end the weekend on an acrimonious tone, LMU hopes for a much lengthier stay in the South Atlantic Conference Tournament on Friday afternoon, participating in the Quarterfinal round against an opponent to be determined in Greeneville, Tennessee.

Thanks to the aforementioned SAC Regular Season crown achieved earlier in the week, the Lady Railsplitters approach the eight-team single elimination bracket as the #1 seed for the second time, competing at 1:30 p.m. on April 23rd against whichever school nabs the eighth-place spot.

A conference tournament title has alluded LMU since joining the league, coming up short in the Semifinal round two years ago in the last opportunity to have a postseason due to the 2020 campaign’s sudden disappearance thanks to the COVID-19 pandemic. Back then, Coach Richardson’s squad was sent home in the round of four at the hands of Anderson, before gaining the last laugh and eliminating the Trojans in the NCAA Division II Southeast Regionals while also snatching their 38th win of that year to set the program record that is now just four wins away from being equaled.

Tshiebwe is a happy player on and off the court

Kentucky fans are already looking forward to having West Virginia transfer Oscar Tshiebwe on the court next season to provide... read more