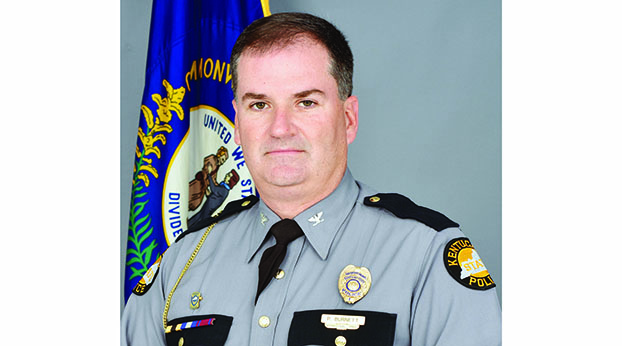 The recent appointment of Phillip Burnett Jr. as Commissioner of the Kentucky State Police marks just one aspect of a career encompassing a long-standing history of service to the community.

Burnett is a Bell County native.

“I was born and raised in Bell County,” Burnett said. “I went to elementary school at Page Elementary and attended Bell County High School.”

Burnett was an athlete in school, taking part in multiple sports in addition to his academic pursuits.

“I played football and ran track,” he said. “I graduated in 1991, and from there attended Southeast Community College, Middlesboro campus, where

I received an associates degree. Then I went to Union College where I graduated with a Bachelor of Science with a focus on secondary education.”

Burnett went directly into law enforcement following college, graduating from Union College on May 4, 1995, and reporting to the Kentucky State Police Academy on June 3, 1995.

“I was happy to get my degree and teaching certification, but I wanted to be a Trooper,” he said.

In 2014, he returned to Post 10, Harlan as post commander. He was then promoted to major on Aug. 1, 2017, and oversaw all KSP posts in the eastern part of Kentucky. He stayed in that role until Sept. 2019, when he was promoted to lieutenant colonel and was placed over KSP’s administrative division. In 2020, he was made the executive director of the office of operations. He stayed in that role until Gov. Andy Beshear made him acting commissioner and promoted him to colonel on Nov. 4, 2020. The governor officially appointed Burnett to the post of commissioner of the Kentucky State Police on April 9 of this year.

Burnett explained what he enjoys most about coaching youth sports.

“All the kids I’ve seen become successful athletes in high school, and also seeing some of them play at the collegiate level, and just to be able to give back to the community, to see these young men and women do good and turn out to be leaders in their school,” Burnett said.

Burnett will continue to reside in Bell County, although he will spend a good deal of time in Frankfort.

“I’ll stay in Frankfort from time to time,” Burnett explained. “Our headquarters is an old academy, so I’ve got a place I’ll stay for a night or two, but I’ll still be a resident of Bell County.

He also credited the KSP Shop with a Trooper Program for his favorite memories from his Kentucky State Police career.

“All the times I’ve participated in the Shop with a Trooper Program in the Harlan Post area,” Burnett said. “To be able to help underprivileged children, to be able to see a smile on their face and take them shopping and give them a gratifying Christmas.”

Burnett is the son of Phillip and Arlene Burnett. He and his wife, Linda, have two sons, Cameron and Blake. He is also an avid hunter and fisherman.

“I’ve been very blessed,” Burnett said. “I’ve had a safe and gratifying career, and it’s proven that it doesn’t make any difference where you’re from you can always work hard, and good things can happen.”

Gov. Andy Beshear provided an update on Kentucky’s “Healthy at Work” guidelines on Wednesday. During his daily briefing, Beshear and... read more