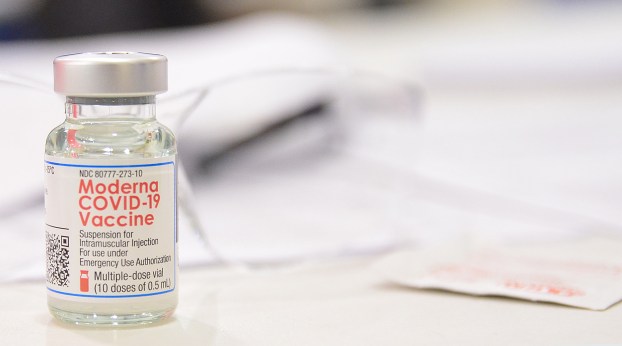 The COVID-19 vaccine is currently being distributed to Bell County residents. Nearly 400 have been vaccinated thus far. - Photo by Jeff Moreland

Vaccine availability to include 40 and older beginning Monday

Kentucky saw a decrease in the number of new cases and deaths due to COVID-19 on Saturday, and the state’s positivity rate remained below 3.00%.

There were 637 new cases reported to state public health officials on Saturday, which was down from Friday’s 646 and last Saturday’s 644. This brings the total number of positive cases to 424,666, since the first one was reported in Kentucky on March 6, 2020.

There were 15 new deaths on Saturday, which came from reports by local health departments. The ongoing audit of death certificates had no report, so the pandemic total of Kentuckians lost to the coronavirus now stands at 6,023. Information on the ages and locations of the latest victims was not available.

Kentucky’s positivity rate remained at 2.80% on Saturday, based on a seven-day rolling average. This marks the sixth consecutive day the state has had a positivity rate below three percent.

Saturday also saw 400 Kentuckians hospitalized, up from Friday’s 383. Of them, 92 people were in the ICU, an increase of four, and 46 were on ventilator, the same as Friday.

The total number of Kentuckians who have had at least their first vaccination is now 1,296,933. Both the Moderna and Pfizer vaccines require two injections four weeks apart. The Johnson & Johnson vaccine is only one dose.

While appointments up until now have concentrated on those 50 years of age and older, or those with other conditions that could make them more vulnerable to the coronavirus, the number of those eligible will be greatly expanding next week.

On Monday, everyone age 40 and older can get appointments for the three COVID-19 vaccines, in addition to all individuals in Phase 1A, 1B and 1C. By April 12, Gov. Andy Beshear says he hopes to make them available to all Kentuckians 16 and up.

Looking outside the state borders, Johns Hopkins University reported Sunday there have been 126,456,051 positive cases around the world, with 2,771,812 deaths. In the United States, 30,199,868 confirmed cases have been reported, and 548,664 Americans have lost their lives.

To see the full daily COVID-19 report for Kentucky, which includes such information as the red zone counties and red zone recommendations, testing locations, vaccine information, the weekly White House Coronavirus Task Force reports for Kentucky, executive orders, and other information on the state’s pandemic response, go to kycovid19.ky.gov.

The Tennessee Valley Authority announced plans on Thursday to build the largest solar-plus-storage project in its Kentucky service area, which... read more