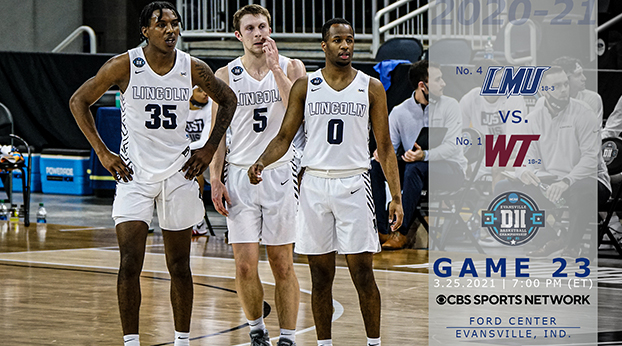 LMU reached its third Final Four in program history with a convincing 90-76 victory over fifth-seeded Colorado School of Mines Wednesday afternoon in the opening Elite Eight matchup. Improving to 3-0 in Elite Eight affairs, the Railsplitters became the first team to punch their ticket to the 2021 Division II Final Four.

Having made it to the Final Four in three of the last five Division II Elite Eight championships after reaching back-to-back Final Fours in 2016 and 2017, LMU is the only remaining collegiate basketball program in the state of Tennessee still in the hunt for a national title.

The Buffs of West Texas A&M routed eighth-seeded Daemen College 97-83 in the second Elite Eight game Wednesday afternoon to earn a spot in the Final Four.

How to Follow
Thursday evening’s Final Four tilt will be broadcast on national television on CBS Sports Network and can be streamed here. Rich Waltz (play-by-play) and Pete Gillen (analyst) will have the call of the game. CBS Sports Network is available through many cable providers and over-the-top (OTT) media service platforms such as Hulu + Live TV. Anyone who has access to CBS Sports Network will need to authenticate to gain access to the online stream. Live statistics of the national semifinal can be followed on NCAA.com. As usual, in-game updates will be available on LMU Railsplitter athletics’ official Twitter account, @LMURailsplitter.

Inside the Ford Center
LMU is playing inside the Ford Center in Evansville for the second time in program history and is 2-1 at the venue after competing in the inaugural Small College Basketball National Hall of Fame Classic in November of 2016. During that stay in Evansville, the Railsplitters claimed an 88-72 victory over then receiving-votes Kentucky Wesleyan before suffering a 91-67 setback against then fifth-ranked The University of Alabama in Huntsville.

Nine Times as Nice
No other South Atlantic Conference men’s basketball program has won more regular-season crowns than LMU as the Railsplitters captured their league-record ninth title in 11 years in late February, surpassing Lenoir-Rhyne. Now with 14 combined, regular season and conference tournament, SAC championships since 2011, LMU is tied for the league record (Catawba) for total SAC titles. The Railsplitters finished their conference slate at 14-3, securing the most victories and highest winning percentage (.824) in the 13-team league. Per the SAC’s men’s basketball policies, the team with the highest winning percentage based on games against conference opponents shall be declared the conference champion. Finishing a half-game ahead of league runner-up Queens (13-3, .813), LMU was able to win the SAC despite having its final two regular-season games, along with the Railsplitters’ home contest against Coker (Feb. 6), canceled due to complexities with COVID-19 contact tracing.

A Top-10 Staple
Entering NCAA postseason play, LMU is ranked among the nation’s top 15 in both national polls. In the final National Association of Basketball Coaches (NABC) Division II Top 25 poll of 2020-21 announced Tuesday, March 9, the Railsplitters are No. 13. LMU is 15th in the ninth D2SIDA Media Poll of 2021, which was also released Tuesday, March 9. The Railsplitters have spent a program-record 31-straight weeks ranked in the top 15 dating back to Nov. 19, 2019. LMU has appeared in the national polls for a total of 150 weeks since December of 2010. The 2021 NCAA Division II Men’s Basketball Elite Eight features seven nationally-ranked programs, including second-seeded No. 4/3 Northwest Missouri State as the highest-ranked team in the eight-team national championship field. Top-seeded West Texas A&M is ranked fifth in the coaches poll and sixth in the media poll, while third-seeded Flagler is ranked No. 8 in both national polls and the fourth-seeded Railsplitters No. 13/15. Fifth-seeded Colorado School of Mines is No. 6/9, sixth-seeded Truman State No. 7/4 and seventh-seeded West Liberty University No. 18/12. Eighth-seeded Daemen College is receiving votes in the D2SIDA Media Poll.

Among National Leaders
Continually striving to be elite on both ends of the floor, LMU leads the nation or is near the top in several offensive and defensive statistical categories including ranking:

Ranked 10th in the country in three-pointers made (64), Whitfield’s 388 points scored in 2020-21 are the 25th-most among all Division II men’s basketball players. The Lipscomb, Alabama (McAdory HS), native is averaging 3.0 made threes a game, the 19th-most nationally, and ranks 29th in the land in made field goals (139), 30th in three-point field goal percentage (43.2), and 18th in three-point attempts (148). Averaging a team-high 18.5 points per game, Whitfield led the 13-team SAC in shooting during the regular season and is 56 percent from the field on 243 attempts. He is fourth on the team in rebounding (4.8 RPG) and is averaging 2.0 assists per contest. Scoring in double figures in all but four games he has competed in after missing the season opener and playing a limited role in the second game of the year at Coker University (Nov. 24), Whitfield put together an astonishing run of 10-straight 20-point showings from Dec. 13 to Jan. 23. The 6-foot-5 wing has a pair of 30-point outings under his belt this season, scoring 32 in 28 minutes against Campbellsville University Harrodsburg (Dec. 19) and 31 in 27 minutes against The University of Virginia’s College at Wise (Jan. 18).

All-SAC Recognition for Whitfield and Henry
Two of the best guards in the nation, Whitfield and redshirt junior Cameron Henry, landed All-SAC accolades to begin the month of March. Whitfield picked up his second-straight All-SAC First Team honor, while Henry was selected to the All-SAC Second Team for the second consecutive season. The preseason All-American and 2020 all-region duo has put together another outstanding campaign this season, accounting for 35.7 percent of the Railsplitters’ scoring. Representing the team’s top two scorers, Whitfield is averaging 18.5 points in 21 outings and Henry 15.4 points in 22 games.

Perhaps LMU’s most dynamic playmaker on both ends of the floor, Henry’s 44 steals this season are the 17th-most in all of Division II men’s basketball. He ranks 33rd in the nation in steals per game (2.0) while among the top 70 players in the land in both total assists (94) and assists per game (4.3). Averaging the second-most rebounds of any Railsplitter (6.0 RPG), Henry leads LMU in blocks (14) and is shooting at 52.8 percent from the floor. A native of Chesterfield, Virginia (Lloyd C. Bird HS), Henry has posted double-figure scoring in 17 different games this season and reached 20 points on six occasions. With a trio of double-doubles, Henry has reached double-digit rebounding three times and came just one rebound shy of a triple-double in the 78-57 victory at Coker on Nov. 24.

1K Scorers
With a driving layup early in the second half of the Railsplitters’ Division II Southeast Regional Championship semifinal win over Tusculum, Whitfield became LMU’s 32nd 1,000-point scorer. Reaching the coveted scoring mark in only 52 games donning the Blue and Gray, Whitfield needs just 71 more points to get to 2,000 for his career. Of his 1,929 career points, 907 came during Whitfield’s two seasons at fellow Division II Trevecca Nazarene University in Nashville. Henry became the program’s 31st 1,000-point scorer with a first-half three-pointer at Tusculum on Wednesday, Feb. 17, and has scored 1,066 points in his Railsplitter career. Senior guard Alex Dahling (775) and junior point guard Julius Brown (653) are also within reach of the momentous 1,000-point mark for their LMU careers.

Be My Guest
With a career-high 37 points on 10-for-14 three-point shooing in the Railsplitters’ dominant 103-67 victory over Emmanuel for the 2021 Division II Southeast Regional Championship title and a fifth double-double of the season in Wednesday afternoon’s Elite Eight win over Mines, junior forward Jordan Guest has been impactful as of late. He led all players in the Elite Eight triumph, scoring a game-high 28 points on 10-for-17 shooting and grabbing 11 rebounds. The 6-foot-9 big man has averaged 32.5 points on 62.2 percent shooting, including 56.5 percent (13-of-23) from beyond the arc, and eight rebounds in LMU’s last two NCAA postseason games.

All LMU Does is Win
Coming off their best season in terms of winning percentage (.970), the Railsplitters have gone 51-4 over the past two years. LMU’s 39-straight victories from Nov. 2, 2019 – Jan. 6, 2021, set both a program and SAC record for consecutive wins. Having won 36 of their last 39 conference outings, the Railsplitters went an unblemished 22-0 in SAC play in 2019-20 for their third undefeated league season in the last five years. Finishing 32-1 overall last season, LMU has dropped only four games in the last 749 days. The Railsplitters have not lost to a non-conference opponent in 509 days, their last non-conference setback coming against West Texas A&M (99-89, OT) at the 2019 Small College Basketball Hall of Fame Classic in St. Joseph, Missouri.

Versus the Buffs
Thursday’s Final Four matchup will be just the second-ever meeting between LMU and West Texas A&M on the hardwood after the Buffs handed the Railsplitters their last non-conference loss on Nov. 1, 2019. In that neutral-site affair, former LMU guard Courvoisier McCauley knocked down a go-ahead three-pointer with 5.6 seconds remaining in regulation off a dish from Anthony Brown, but West Texas A&M would get a game-tying triple with 1.7 seconds left from Qua Grant. The Buffs then outscored the Railsplitters 13-3 in the five-minute overtime period for the high-scoring 99-89 win.

About Coach Schertz
Since taking over the LMU basketball program, coach Schertz has amassed an astonishing 337-68 record over 13 seasons. Only two wins shy of becoming the Railsplitters’ winningest coach, Schertz is just one victory from tying Tennessee Sports Hall of Fame member Dean Bailey’s school-record 338 wins (1948-75). Schertz’ career winning percentage of .832 is the third-highest of any head coach in men’s college basketball history at any NCAA level (minimum 10 seasons). He is just behind Gonzaga head coach Mark Few (.835) and Nova Southeastern leader Jim Crutchfield (.841) among active head coaches with at least 10 years at the helm. On Wednesday, Jan. 8, 2020, coach Schertz reached his 300th career victory with a 76-64 conference home win over UVA-Wise. Reaching the 300-win milestone in only 365 games as a head coach, the seven-time SAC Coach of the Year owns the second-most SAC victories with a phenomenal 214-39 (.846) league record. On Wednesday, March 17, Division I Missouri Valley Conference member Indiana State announced Schertz as the Sycamores’ 26th head coach. Schertz will take over the Indiana State program at the conclusion of LMU’s 2020-21 campaign.

About West Texas A&M
Led by seventh-year head coach Tom Brown, the Buffs’ only two losses in 2020-21 have come against then 21st-ranked Dallas Baptist University (87-78) on Jan. 9 and then sixth-ranked Lubbock Christian (103-85) on Feb. 27. Winning its fourth Lone Star Conference (LSC) Tournament, West Texas A&M advanced out of the Division II South Central Regional Championship with wins over No. 16 Dallas Baptist (82-65) and No. 10 Lubbock Christian (101-92). The Buffs were assertive in their Elite Eight triumph Wednesday, shooting 55. 7 percent from the field and scoring 50 points in the paint against Daemen. Much like the Railsplitters’ Elite Eight victory, West Texas A&M led by as much as 26 points in the second half. However, the Buffs gave up 78.3 percent second-half shooting to the Wildcats as Daemen scored 51 points and went 6-for-7 from distance in the closing 20 minutes. West Texas A&M features a pair of All-American guards in 6-foot-1 junior Qua Grant (22.4 PPG) and 6-foot junior Joel Murray (23.9 PPG). Both averaging over 20 points per game, Grant leads the team in rebounding (8.2 RPG) while shooting 53.4 percent from the floor and 40.9 percent from deep and Murray leads the Buffs in assists (4.4 APG).

Looking Ahead
With a Final Four win Thursday evening, LMU would play the winner of second-seeded Northwest Missouri State and third-seeded Flagler College for the 2021 Division II national title Saturday, March 27 at 12 p.m. ET/11 a.m. CT. The Bearcats (26-2) and the Saints (18-2) tip off their Final Four Thursday night at 9:45 p.m. ET/8:45 p.m. CT.

Much of southeast Kentucky was hit by flooding recently, and while Bell County was not hit as hard as many... read more