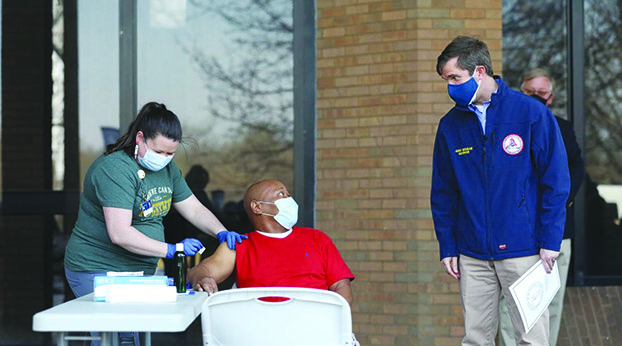 There was an increase in several COVID-19 numbers, according to information released by the Governor’s office on Wednesday.

A total of 1,010 new cases were reported to state public health officials, the third day in a row of increases, and raising to 412,924 the number of positive cases since the first one was reported in Harrison County on March 6, 2020.

There were 34 new deaths on Wednesday, a big jump from 21 on Tuesday and 10 on Monday. That brings the pandemic total to 4,884.

The good news included the number of Kentuckians hospitalized with the coronavirus on Wednesday, which fell to 524. Of them, 138 were in the ICU and 75 on a ventilator, also decreases from Tuesday.

Kentucky’s positivity rate continued its decline, and stood at 3.93%, based on a seven-day rolling average. That was down from 3.94% on Tuesday, and is the lowest since last September.

Gov. Beshear on Wednesday visited the regional vaccination site in Ashland, which was launched in partnership with King’s Daughters Medical Center and is located there.

“Through a global pandemic, and now through a back-to-back ice storm and record flooding, King’s Daughters never fails to show up for their community,” he said. “Along with local leaders, they have worked tirelessly to help us ensure every Kentuckian has a COVID-19 vaccination site close to where they live so they can receive their shot of hope, a modern medical miracle.”

King’s Daughters Health System has administered more than 42,000 COVID-19 vaccine doses so far, including more than 1,300 on Wednesday alone.

The governor and some members of his staff were also in Hazard, for an update on recovery efforts from both the ice storm and flooding, in that part of the state.

Kentucky Emergency Management Director Michael Dossett said it’s been a tough last 30 days in Kentucky. “We began Feb. 9 with a monumental ice storm. 154,000 homes without power, and we moved through that, which was a hard recovery. We fast-forward to Feb. 26. The rain didn’t stop for a number of days, and this area along with the region, received six-plus inches of rainfall, breaking a record.”

He noted the rainfall was a record, and so is their response. “To date, we have 1,475 individual assistance claims in the system. Of those claims, half of them are for major damages and destroyed homes. That goes back into Kentucky history as a record.”

Dossett says FEMA, the Federal Emergency Management Agency, arrived Monday to begin their assessment of ice storm damage. “We have no less than 16 RECCs, rural co-ops, and utilities that have filed claims with us, totaling over $30 million.”

FEMA is also with its teams assessing flood damage.

“We’re looking for two major declarations, one for the ice storm and one for the flooding. We’re looking at a total of over $40 million in damage in the state of Kentucky, over a four-week period.”

During the Hazard event, officials with Passport Health announced the donation of $100,000 to the Foundation for Appalachian Kentucky, to aid flood relief efforts.

To see the full daily COVID-19 report for Kentucky, which includes such information as the red zone counties and red zone recommendations, testing locations, vaccine information, the weekly White House Coronavirus Task Force reports for Kentucky, executive orders, and other information on the state’s pandemic response, go to kycovid19.ky.gov. 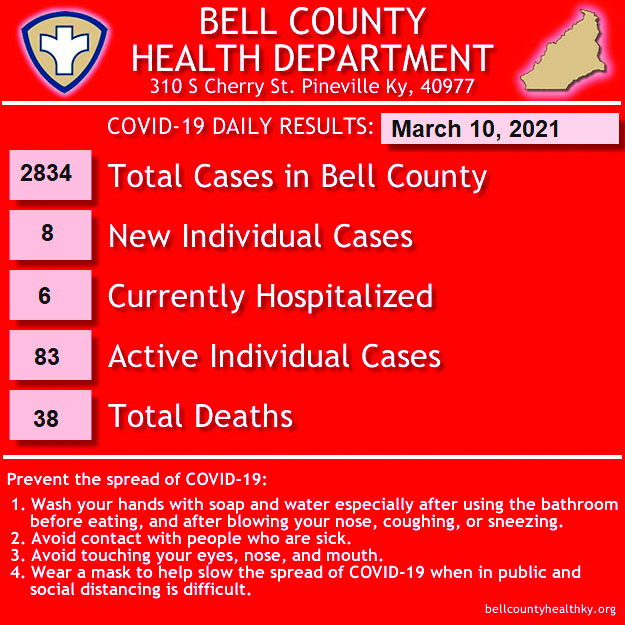 In Bell County as of Wednesday, six people were hospitalized with the virus. The county had 83 known active cases, and 38 deaths related to COVID-19 as of Wednesday.

The Bell County Health Department recommends the following steps to help slow the spread of COVID 19:

• Wash hands with soap and water before eating, after blowing your nose, coughing, sneezing, or after using the restroom;

• Wear a mask when in public and social distancing is difficult.

Summer is on the way, and with it comes 4-H Camp, making a reappearance after having been canceled last year... read more