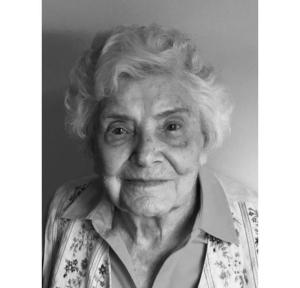 f February, 2021 in Phoenixville, PA at the age of 103 years.
Irene was born on the 17th of August, 1917 in Bluefield, VA to James Edward and Annie Crockett Groseclose. The family later moved to a dairy farm in Somerset, KY where Irene grew up surrounded by her 10 brothers and sisters. Each child had assigned chores; Irene preferred to be outside of the house in the dairy barn working alongside her brothers. She had a great time growing up as part of this large family – climbing trees, swimming in the nearby river, and riding the farm horses.
Irene graduated from Somerset High School, where she participated in activities from glee club to junior class vice president. After high school, Irene followed in the footsteps of her older sister Mary and attended Western Union Telegraph School in New York City. After this training, Irene was posted in Western Union offices in a series of towns across Kentucky, one of which was Middlesboro. During her stay in Middlesboro, she met her future husband Horace Nelson Huff. Irene and Nelson married on Valentine’s Day, 1942 in her hometown of Somerset. All too quickly after the wedding, Nelson left to serve in the army during World War II. He was assigned to a variety of locations in the South Pacific, including Hawaii which was subjected to unpredictable bombing attacks. The newlyweds would not see each other again for 3 years. During this time, Irene staffed the Western Union office in Middlesboro, receiving telegrams with good news and bad news. Upon Nelson’s return, he joined a local wholesale distributorship Warren P. Rash Company. Irene became a homemaker and excellent seamstress. She was also active in the First Presbyterian Church of Middlesboro where she was involved in the women’s Bible study circle and volunteer efforts. Irene enjoyed playing golf and bridge at the Middlesboro Country Club and socializing with her husband and their many friends. The couple had one child, Anne Crockett. After Nelson died in 1973, Irene worked as an optical assistant to support herself and her daughter. She continued to play golf, frequently winning ladies’ tournaments. Upon retirement, she devoted her time to golf, bridge, sewing, and home maintenance.
Irene frequently traveled from Middlesboro to Pennsylvania to visit her daughter Anne and Anne’s husband Bruce and later also her granddaughter Jessica. In November, 2013, at the age of 96, Irene moved from Middlesboro to live in a retirement community in Phoenixville, PA near her daughter’s family. There she enjoyed frequent outings and dinners with Anne and her family, as well as the various activities (especially Bingo!) in her retirement community. She had many friends in her community and was fortunate to celebrate her 100th, 101st, and 102nd birthdays with parties attended by virtually all 80 community members. The 103rd birthday party was, unfortunately, not possible due to the pandemic.
Irene will be remembered for her smile and wit, her competitive spirit, her independence, and for always being a Southern lady.
Irene is survived by her daughter Anne, granddaughter Jessica, son-in-law Bruce Edward Miller, brother-in-law Alvin Huff, and numerous nieces and nephews.
A funeral service will be held at Green Hills Funeral Home (31 Hurst Road) in Middlesboro on Tuesday 02 March at 10am. Kindly wear a mask and plan to social distance. Private burial will be in the Middlesboro Cemetery.
Donations may be made to the American Heart Association.
Green Hills Funeral Home, Middlesboro, is honored to serve the Huff Family.