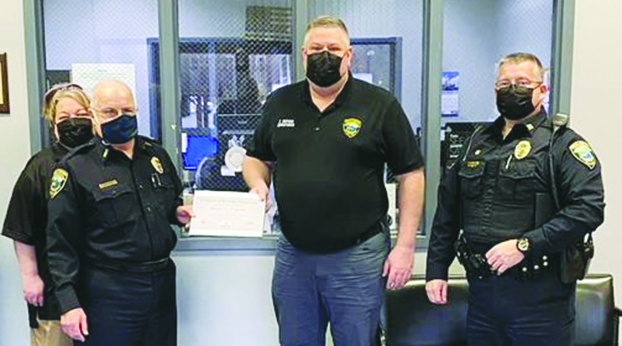 Daniel Hopson, Middlesboro’s newest dispatcher, graduated first in his class from the academy.

According to a press release, the Public Safety Dispatcher Academy requires 164 hours of practical and classroom instruction which takes place over a four-week period. The academy includes various categories of instruction such as calls for service, call processing, information systems, and phone and radio procedures.

While Hopson has been with the department for a little while, he just completed the academy. He explained he hired on with the Middlesboro City Police Department in October, but it takes some time once hired to complete all the requirements for attending the academy.

“It takes a lot of paperwork,” Hopson said on Friday. “I just graduated this morning.”

Hopson explained a few details about the academy program for dispatchers, which has undergone some changes due to the COVID-19 pandemic.

“It’s a four-week academy,” Hopson said. “This is the first one that was done totally virtual. There were 22 people in the class.”

Hopson took top honors in the class, with an average score of 95.66 percent.
“The instructors go through a powerpoint presentation – up to three or four a day – about various things like Tele CPR, emergency dispatch, things like that,” Hopson said.

Hopson is from the area, having grown up in Cumberland Gap, TN. His family also operated a business in Middlesboro.

“My father and his brothers ran a business here for years, Hopson Dental Lab,” Hopson explained. “They made dentures here in town for a long time.”

Hopson mentioned his favorite part of the job is helping people.

A man is facing charges including manslaughter after a person was allegedly killed when a vehicle collided with a person... read more