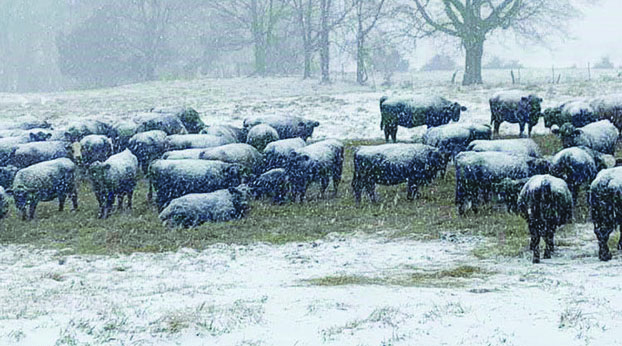 Cattle at the P&H Farms in Lyon, Crittenden and Caldwell counties operated by Phillip and Natalie Parish.

While many businesses, schools and government agencies in the state closed one or more days this week due to snow and ice storms, there is one group that does not get snow days: Kentucky livestock producers.

Most days, things are routine, but during times like the past week’s winter weather and cold, it’s been anything but routine.

Water freezes, roads are treacherous and sometimes impassable and even calves are born. That frozen water must be thawed out or the ice broken in order for both dairy and beef cattle breed to get adequate water to drink. Whether the source is a stock tank, automatic waterer or pond, farmers are always on duty to make sure their cows have access to freshwater, even if they have to truck it in.

Feeding is another matter entirely. While most cattle are fed hay during the winter months, their consumption during extreme cold can ramp up. Cold temperatures require more body heat in order for them to stay warm and producing more body heat requires more fuel in the form of hay and feed.

University of Kentucky Associate Extension Professor Dr. Jeffrey Lehmkuhler, who specializes in nutrition in the Department of Animal and Food Sciences, notes that during extreme weather such as what we are experiencing across the state, there can be as much as a fifteen percent increase in hay usage and consumption.

While commercial-scale pork and poultry producers generally keep their animals inside barns, weather-related issues can arise there, too. While most have generators, the power can fail. Too much heavy snow or ice can cause barn roofs to collapse. Impassable roads can prohibit the delivery of piglets or chicks, or the load-out of mature animals destined for market. In the dairy industry, there’s always the possibility that a producer may have to dump milk because the truck simply can’t get to the farm.

Those who raise livestock and poultry chose their path. They do it for a number of reasons: to make a living, because they love it, because it’s their family business or, most likely, a combination of the above.

Whether you are enjoying some snow days or are ready for the cold temps to move out, remember your Kentucky livestock and poultry producers aren’t taking snow days. They are working to keep your grocery’s meat and dairy cases full, and they’re taking the best possible care of the animals in their herds and flocks.

A man is facing theft and drug charges after allegedly shoplifting and running from police. Robert Inman was arrested on... read more