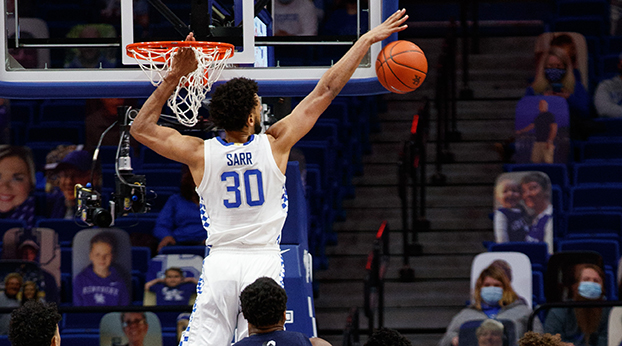 Olivier Sarr blocks a shot for the Wildcats in their win against Auburn Saturday. - SEC Photo

John Calipari could sense a turnaround on the horizon.

Despite improvement behind the scenes during the past three weeks, the losses kept piling up for Kentucky in a season of disappointment. The Wildcats (6-13, 5-7 Southeastern Conference) came close to a breakthrough in an 81-80 loss to Arkansas earlier this week but may have turned the proverbial corner with an 82-80 win over Auburn Saturday, ending a four-game losing streak.

For the Wildcats, the first win since a 76-58 victory at Florida on Jan. 9 was much-needed moving forward as Kentucky attempts to keep its NCAA Tournament hopes alive with five games remaining and possibly the conference tournament.

“They’re finally playing together (and) they have to have rewards,” Calipari said. “We’ve been making strides for three weeks. You’ve got to have a reward at the end, because of the hard work and the extra conditioning they’re doing and sacrificing for the team, you’ve got to have some reward. You’ve got to win somewhere.”

The spark for the hosts came during the second half against the Tigers. The Wildcats opened the second half with a rare scoring blitz and outscored Auburn 25-9 to open, turning a six-point halftime deficit into a 55-45 advantage with 13 minutes remaining.

BJ Boston played a big role in the decisive spurt, knocking down a pair of 3-pointers as the Wildcats stretched the margin to 13 before the Tigers made a comeback. Auburn tied the score at 77-77 with 28 seconds remaining following a Davion Mintz turnover.

However, Mintz made up for the miscue with a 3-pointer from the top of the key on the ensuing possession that gave the Wildcats the lead for good. Kentucky made a pair of free throws on four attempts to hold off Auburn in the closing seconds.

Calipari said the trey by Mintz was a “dagger” he’s been searching for from his squad amid the struggles to close out close games.

Kentucky, which struggled from the 3-point line for most of the season, connected on 11 treys against the Tigers and was paced by Boston, who made four shots from long range. The Wildcats have made 25 3-pointers in the past two games, another sign of the team’s significant improvement during the past three weeks.

Although the Wildcats struggled shooting behind the arc during most of the season, Boston said “nothing has really changed” since the beginning of the season.

“We’ve been getting up a lot of shots, a lot of made shots actually,” he said.

Isaiah Jackson held his own against Auburn and led the Wildcats with 18 points and grabbed 11 rebounds for his first double-double of the season. Jackson also two blocks and pulled down a clutch rebound in the final seconds.

Boston followed Jackson with 17 points, while Keion Brooks added 12 points for the Wildcats.

The Wildcats left the court smiling, just as Calipari urged his squad to do before tipoff.