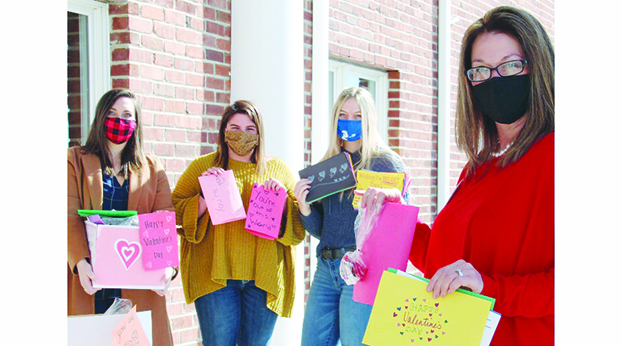 Members of Lincoln Memorial University’s Splinter Service Leaders display some of the cards and treats their group will provide to hospice patients for Valentine’s Day. - Photo submitted 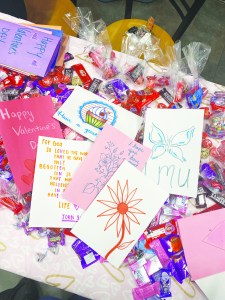 Lincoln Memorial University students in a group known as The Splinter Service Leaders are providing treats and cards to hospice patients for ValentineÕs Day. – Photo submitted

The Splinter Service Leaders, a group of students at Lincoln Memorial University, are working to make some hospice patients’ Valentine’s Day a little brighter.

Christal Hall, community engagement communicator for Bluegrass Care Navigators (Hospice of the Bluegrass), explained what the group is doing.

According to Hall, she did a presentation for the LMU nursing class, and afterward she was contacted by one of the college professors who had an idea for the student’s service learning project.

“They are required to do a project annually through an organization for service hours,” Hall said. “They picked us.”

Hall said the students wanted to do something for the hospice patients and came up with the idea of Valentine Treat Bags.

Hall explained the students will be putting together treat bags for the patients.

Abigail Tillman, president of Splinter Service Leaders at LMU, explained what their group is doing.

“Our club came up with the idea of the event and we’re working with the Office of Leadership and Outreach on campus to host the event,” Tillman said. “We are creating goodie bags and cards for patients who are in hospice care.”

Tillman explained the goal driving the project is simply to give a little bit of joy to people in hospice.

“It’s just something to make their day,” Tillman said.

The project is called Hearts for Hospice.

“It’s kind of like a Valentine for those patients,” Tillman said.

According to Tillman, the idea started simply enough.

“I met Christal at my clinical orientation,” Tillman said. “She was talking about how at Christmas a bunch of volunteers had made candy and dropped it off to their patients and how it really made their day. Our club focuses on community service events on campus, and I thought it would be an amazing idea, especially around Valentine’s Day, to make something special for those patients to just put a smile on their face.”

Tillman said the event is open to the entire campus to participate.

“Community service is really important to LMU,” Tillman said. “Our club is focusing on engaging students in community service and giving back…as a college student, you think of all the big things that are going on – getting your degree – sometimes it’s nice to take a step back and look at the small things in life and giving back to those who need it most.”