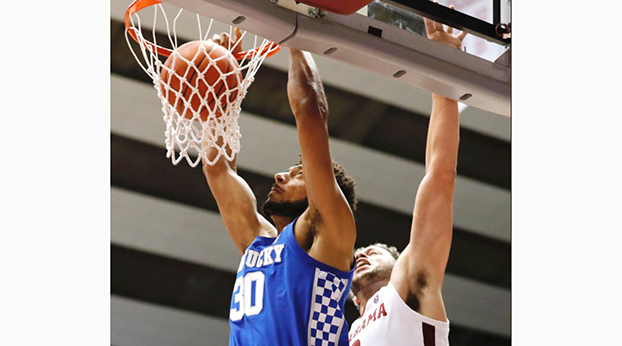 Kentucky slowed down Alabama, but the ninth-ranked Crimson Tide pulled away late and muscled their way to a 70-59 victory over the Wildcats on Tuesday night in Tuscaloosa.

Alabama, which rolled to an 85-65 victory over Kentucky two weeks ago in Lexington, made all 10 of its free throws in the final 1:35 and outscored the Wildcats 16-5 in the final four minutes for its first regular-season sweep of UK since the 1988-89 season.

The Crimson Tide (14-3, 9-0 Southeastern Conference) increased its winning streak to 10 games for the first time since the 1996-97 season and won their first nine league encounters for only the second time in school history.

The letdown down the stretch was all too familiar to Kentucky coach John Calipari, who watched his team suffer their fourth loss in the past five games.

“We, again, got out-toughed,” Calipari said. “It just makes me sick. We got out-toughed throughout the game. We fought like crazy the last three minutes. (But then) dudes back away playing ready not to lose versus playing to win (the game). … I’m just, I’m just disappointed. I thought before the game, and I thought during the game, we were going to win the game.”

Calipari changed his team’s strategy against Alabama after it made 14 shots from long range and scored 28 points off 19 turnovers in the first meeting. The approach slowed down the pace as the hosts made just six 3-pointers this time around. Kentucky committed 17 miscues in the rematch and the hosts capitalized those turnovers into 20 points in transition.

“They fought like crazy (and) we changed how we played them,” Calipari said. “They end up, you know, one of those teams that scores all those points. And, you know, then in the 60s, think about that, we go to different. We played it a little different. We still gave them a couple of threes. But, you know, I mean, we had our chances.”

Kentucky got most of its scoring from the bench, paced by Dontaie Allen, who made four of the Wildcats’ six shots from behind the arc and finished with 12 points. Davion Mintz and Olivier Sarr also added 12 points apiece for the Wildcats.

Sarr said the Wildcats “did some great things defensively” but couldn’t keep up the pace when it mattered the most.

Overall, Calipari added the Wildcats are getting closer to a breakthrough but haven’t learned to finish close games. Kentucky fell to 0-10 in games decided by 10 points or less.

“I’m proud that they fought,” Calipari said. “I know we’re getting closer, but you just want to win these games, just like the LSU game. You want to win the games just like the two before those. These are wins for us. And we’re letting go of the rope or not mentally tough enough to not turn it over, make the play you need to make to be able to function.”