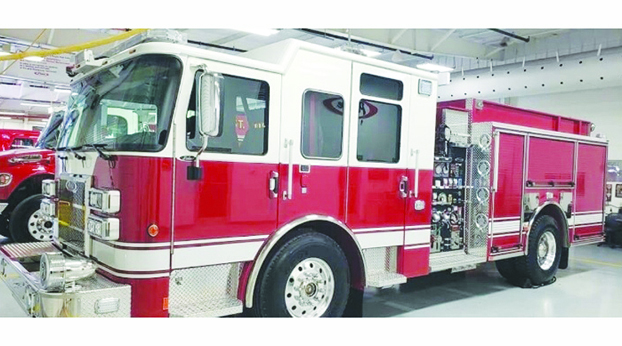 The Middlesboro City Fire Department has taken delivery of a new fire truck, which arrived in the city on Friday.

“We received a call on Monday of last week that our truck was in Lexington and ready for final inspection and pick up,” England said. “We drove up and did a final inspection on Friday and took possession of the 2020 Peirce Saber pumper.”

The acquisition of the truck has been in the works for several months.

“The origination of this was applying for an AFG (Assistance to Firefighters Grant) grant through FEMA,” England explained. “Once we applied for that, there was about a three-month waiting period before we heard if we got that grant or not.”

England said once the news was received the grant had been awarded, the process of obtaining a truck was put in motion.

“Once we received the letter…the process of finding the truck, purchasing it, and getting all the moving parts on it that fit our department was started,” England said.

The task of locating a truck and having it outfitted to the Middlesboro Fire Department’s specifications took approximately four months, according to England.

“We’ve been about nine months with this process,” England said.

Nine months is not a long period of time for such a project, England said.

“Usually, a federal grant can take anywhere from as quick as six months up to almost two years,” England explained.

The new truck has multiple advantages over any of the city’s older equipment.

“Our truck closest in age to this one is around 26 years old,” England said. “Technology has grown since then. This truck is a custom truck, built for our department.”

England mentioned the new truck is a 2020 model which should translate to increased reliability over the other vehicles, which are much older.

According to England, there is much more room in the new truck, allowing for better movement for the crew as they go about their duties. The new truck also has a foam system on board.

“The pumps basically operate the same, except this one has a foam system on it,” England said. “With any of our other trucks, you had to manually set up a foam system, which consisted of an approximately five-minute ordeal of getting it set up. If you’re needing foam, you don’t need it in five minutes, you need right now.”

The truck will be in service as soon as it is fully stocked and training is complete, England said.

“We anticipate about two weeks from today we’ll have it in service,” England said.

The grant paid for 95 percent of the cost of the truck, he explained.

England said the truck will serve the community for a long time to come.

“It adds a definite safety factor for our guys, and also to the citizens,” England said. “It’s a valuable piece of equipment.”