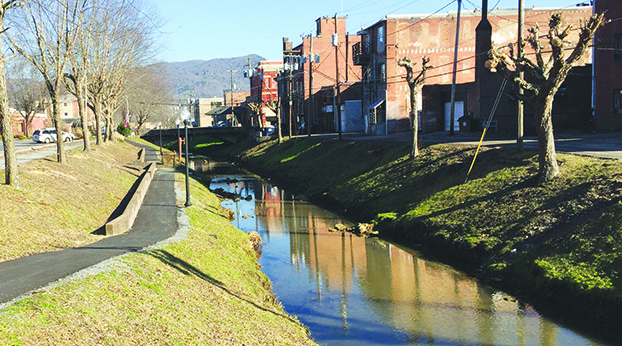 Middlesboro Main Street has arranged to utilize volunteers from the drug court program to help with issues such as replacing Christmas lights and keeping the Canal and downtown streets clean. - Photo by Joe Asher

According to Grandey, Main Street has already utilized hundreds of hours provided by the participants.

“We have registered over 625 hours since August of last year with this volunteer group,” Grandey said.

The participants have recently refurbished many of the city’s Christmas decorations.

“All the lights that are downtown – the Christmas lights and the snowflakes – those were all refurbished by that group under the auspices of Main Street,” Grandey said. “We have undertaken the cleaning of the canal, and all of that is being done by the volunteer organization that’s been appointed to us by the courts. We have undertaken some physical modifications and repair to the Alexander Arthur building and that has been going on with their help.”

Grandey said the program is filling an important role.

“The city can no longer use prisoners because of COVID,” he explained. “These volunteers have worked wonderfully with us to fill some of those gaps of keeping things clean, even from the standpoint of picking up leaves and picking up litter in different parts of the community. That has just been a wonderful Godsend to do some things that we just would not have the labor force to do otherwise.”

According to Grandey, the program is possible due to Judge Robert Costanzo and Judge Robert Yoakum and the Bell County Drug Court.

“I used to work in Drug Court, and when I took over as executive director for Main Street, I knew there was a volunteer force out there that we had not tapped,” Grandey explained. “It was becoming more difficult for the people at Bell County Drug Court to find places that they could do volunteer work because of the COVID situation. So, I reached out to them and asked if they had some volunteers to do some cleanup around city hall. Then when the Christmas lights came to my attention, I knew we were going to need to replace over 13,000 light bulbs in those fixtures, and the Bell County Drug Court was able to send us enough volunteers that we were able to rewire them and put new bulbs in all of them in under six weeks. That’s a big undertaking.”

Grandey said Main Street will continue to use this resource when the COVID-19 situation is resolved.

“The mayor and I have talked extensively about how we are going to continue to do that and keep the litter under control,” Grandey said. “Litter is a big problem, and it’s not just downtown…if we have problems in other areas that we think we need to address we’ll be more than happy to step in and help with that also.”