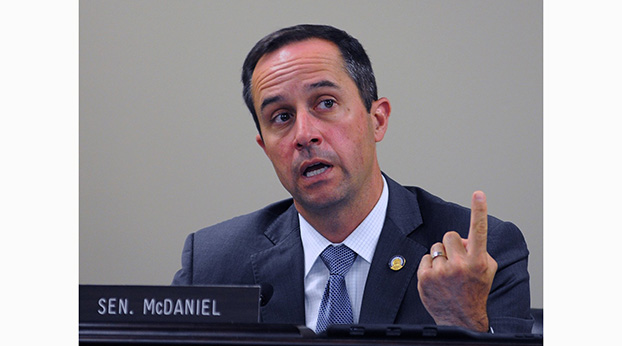 Budget bills for the three branches of Government in Kentucky continue to advance in the General Assembly, winning Senate committee approval on Tuesday.

The Senate Appropriations and Revenue Committee approved the measures covering the Executive, Legislative and Judicial Branches.

“With the exception of a few technical adjustments,” he told the panel, “they are exactly the same as the previous year’s budget.”

One minor change in the executive branch budget bill’s version involves an increase in the forecast for coal receipts of around $8 million. “The House had sent that to the Local Government Economic Development fund,” McDaniel stated, “We instead have sent that revenue to the Budget Reserve Trust Fund,” also known as the Rainy Day Fund.

In the Judicial Branch Budget, a paragraph on defined calculations was removed, while the money remains with the Judiciary.

All three measures were approved without debate and now head to the Senate floor, where a vote could occur on Wednesday.

McDaniel explained the process. “The intent is getting this into a free conference committee sooner so that we can get a spending plan in place, and provide the final measure of stability financially for the Commonwealth, as we advance through this biennium.”

Ordinarily, lawmakers approve a two-year budget during their sessions in even-numbered years. But due to the COVID-19 pandemic and uncertainty of its effect on state finances, the General Assembly only passed a one-year state spending plan in 2020. The new budgets would take effect on July 1.

The fifth budget bill, dealing with COVID-19 related funding for state agencies, eligible small businesses, non-profits, and others, remains in the House Budget Committee after the panel chair, Rep. Jason Petrie, R-Elkton, became aware of problems in the bill. Unless a special meeting is called, action on that measure won’t occur until after lawmakers return from their recess in February. That recess is expected to begin after Wednesday.